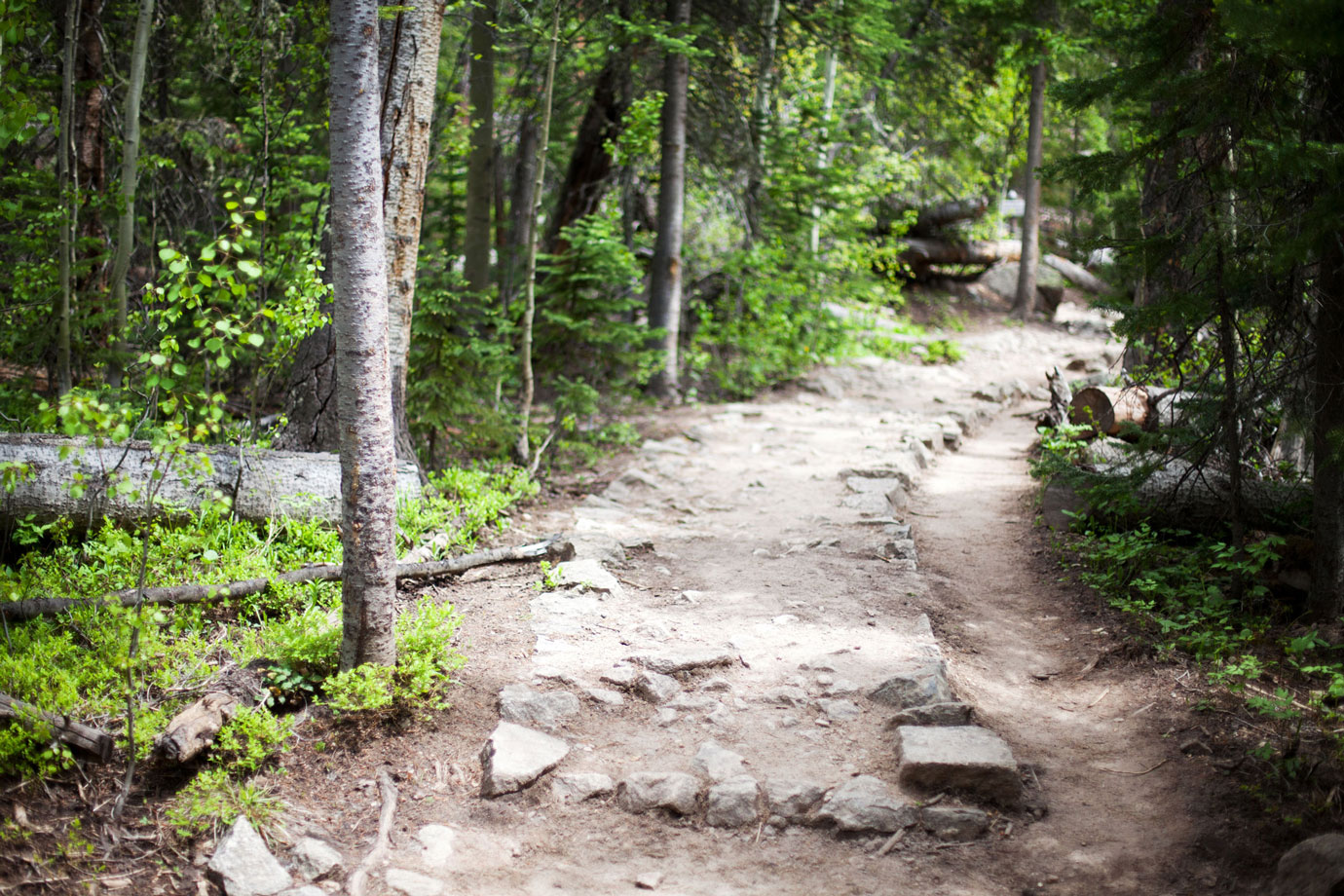 My gear selection and backpack loading is improving with each little adventure I embark upon. This weekend I discovered that, in some ways, I’ve become rather efficient at packing for a hike. I sort my gear into separate, light-weight bags that slip neatly into my backpack. Each of these small bags serves as a compartment for similar types of gear—one bag holds rain gear, another holds my first aid kit and safety equipment, and a third holds a bandana, lip balm, and kleenex.

One advantage of using these bags is that I can tether them to loops on my backpack and if a bag falls out of the backpack it is not lost on the ground, over a cliff, or in a stream. Instead, any wayward gear is dragged along behind me until I figure out that I’m, well, dragging wayward gear along behind me. I’ve also trimmed my equipment selection down to a conservative handful of supplies. My backpack is now neither too heavy nor too bulky. And so far, with one small—but significant—exception, I’ve needed nothing that wasn’t in my pack. That small significant exception is an adequate supply of food—but packing food for the trail is an entirely different problem that will require more time for me to perfect. 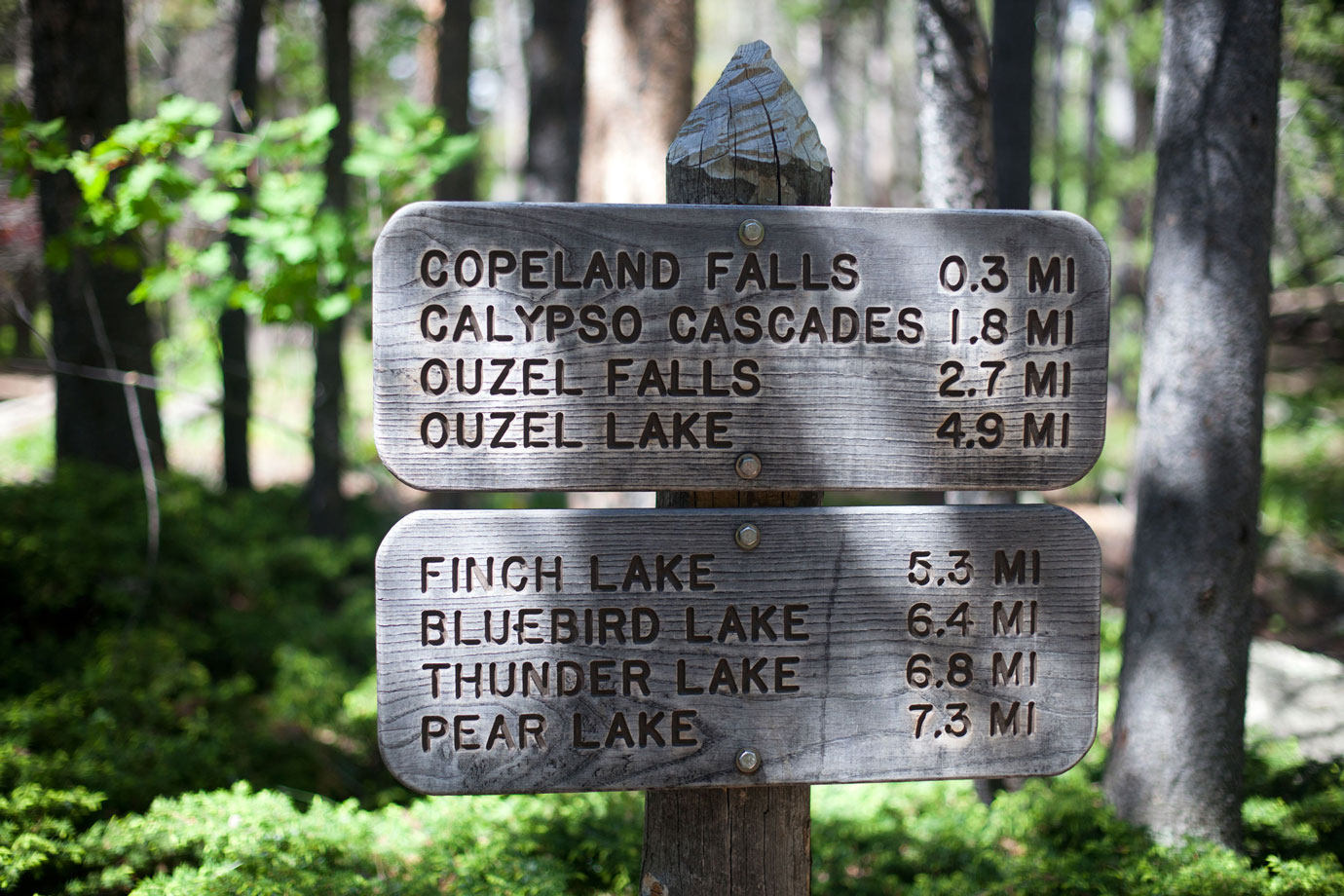 As you can see, there are many destinations hikers can visit along the network of trails in Wild Basin.

This weekend I also discovered that, despite the recent improvements in my ability to stuff a backpack with the perfect gear, I’m in some ways still totally crap at it. Consider the most obvious packing problem I exhibit: duplication. Let me elaborate—today I took my DSLR camera but forgot to remove my compact camera from my backpack. So by my count, that’s like two cameras, yeah? Yeah. Not the lightest option.

And the duplication didn’t end there. Upon reflection, I realized I had with me: two windbreakers, two headbands, and two long-sleeved thermal shirts. Part of this overpacking can be attributed to my inability to gauge the weather in the mountains. But I realize that despite the variable climate conditions I might face on the trail, I will probably only ever wear one windbreaker at a time (or one headband, or one thermal shirt for that matter) so there’s no discernable reason to double-up on these items. 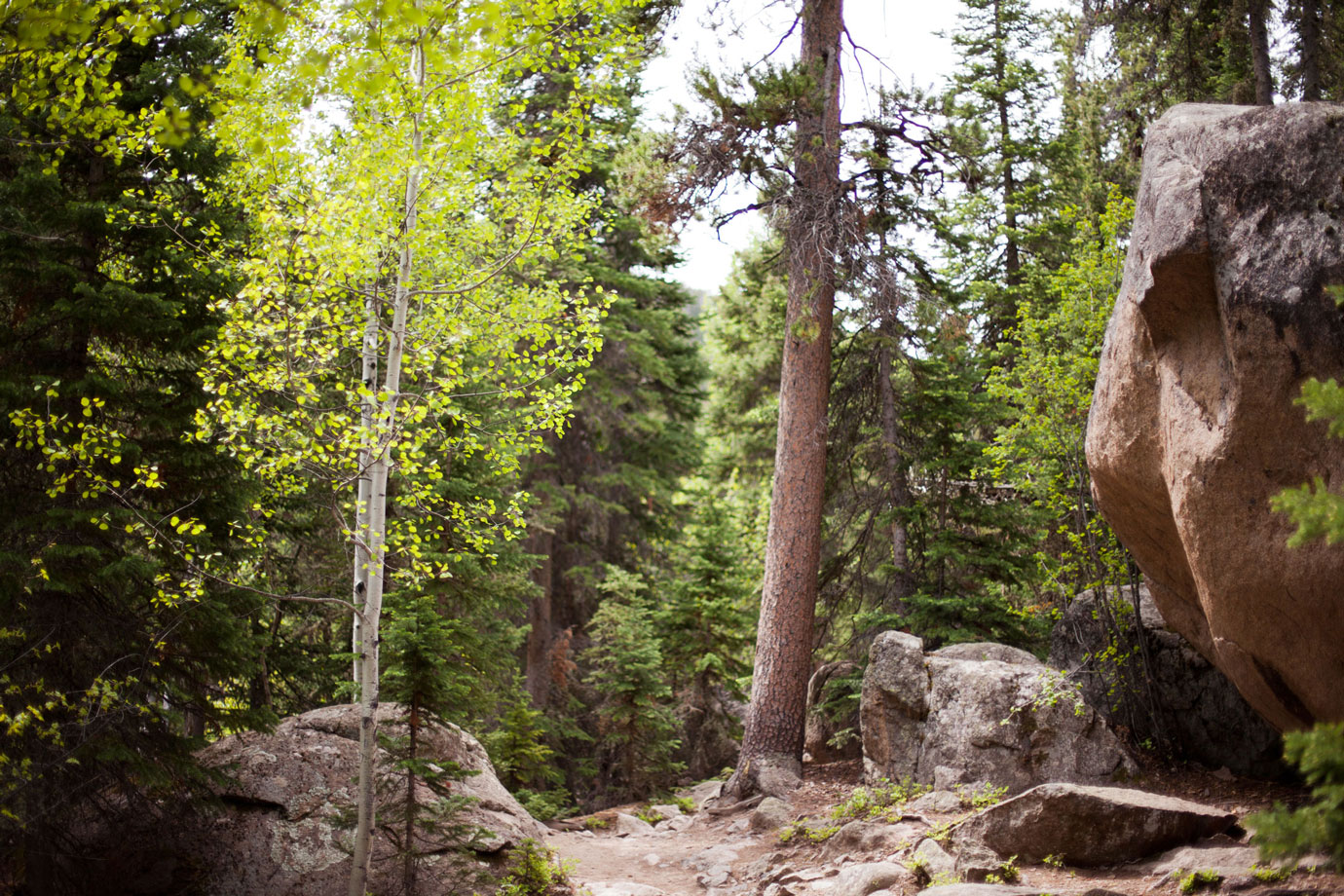 I love aspens. That is all.

Another thing I discovered this weekend is that I’m going to have to actually read that book on wilderness navigation I bought last month. It became abundantly clear to me today that simply purchasing a fancy looking compass and a fistful of National Geographic Trails Illustrated Topographic Maps isn’t going to make me any better at navigating the wilds of the Rockies unless I take the time to actually learn how to use these materials. 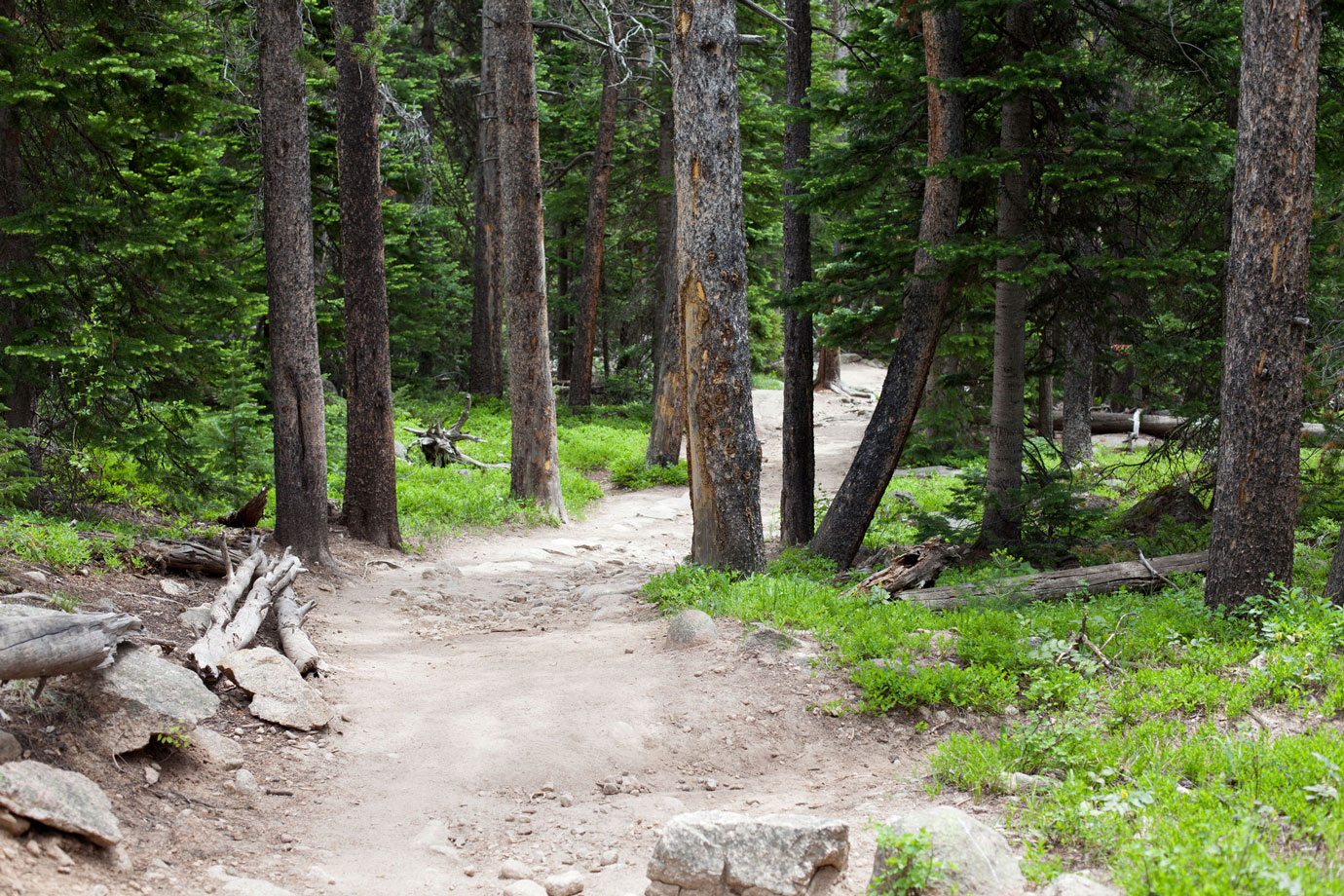 Before leaving for my hike today, I remember saying to Phil that it should be easy to navigate this trail—all I had to do was keep Ouzel Creek on my left and the high ridge (you know, the one that was so obvious on the map) on my right. Of course, after just five minutes of hiking, I could hear but no longer see Ouzel Creek and there was a ridge on my left and thick forest on my right. To make matters worse, little splinters of trails branched off willy-nilly in every direction, with nary a trail marker in sight. If it weren’t for the steady stream of hikers leading me down the main trail, I don’t know where I would have ended up. Superb. 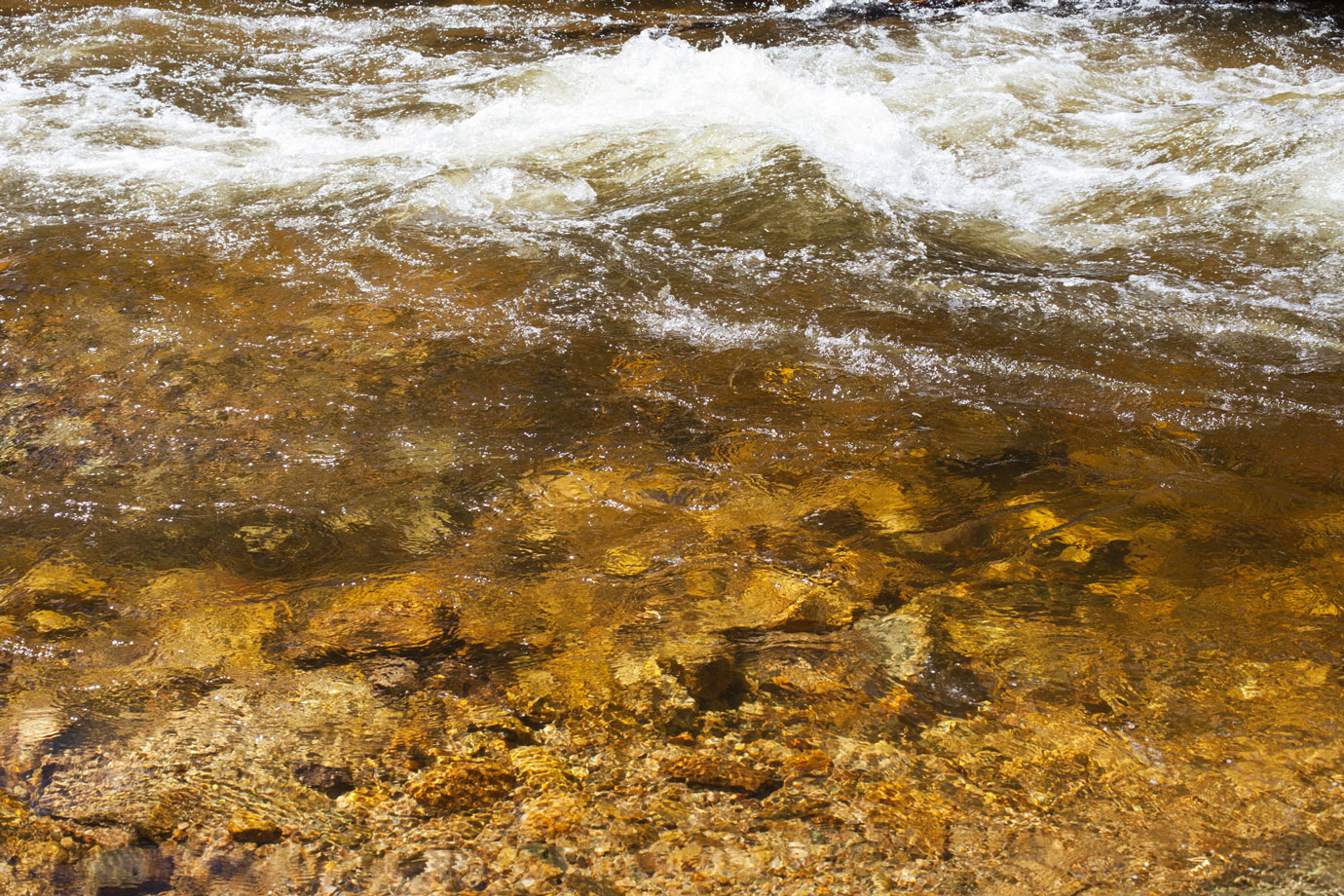 Meltwater trickling down from higher ground meant a lively and turbulent flow in Ouzel Creek.

The upside is that I didn’t get lost and I made it as far as Calypso Cascades. Along the way, I met a group of people who were identifying wildflowers as they hiked. They named the various species and pointed them out to me as we walked. I lingered with them for a little while enjoying their conversation and expertise. Not wanting to out-hike my welcome, I moved on when they paused for some time to admire a wild clematis. When I reached Calypso Cascades, I took a short break and enjoyed the views. But before long, I decided it was time to turn around and make my way back to the trailhead. 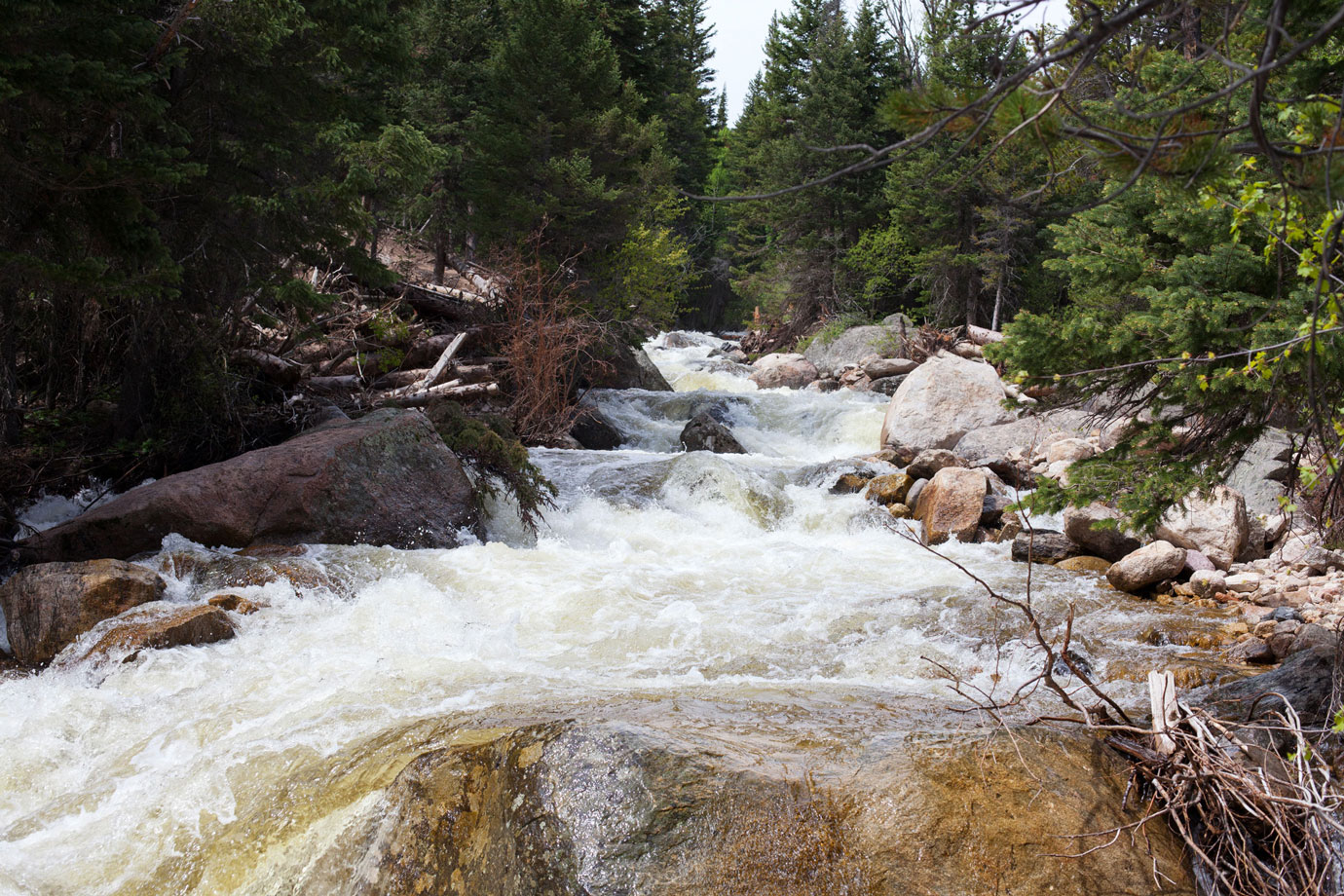 On the hike back to the trailhead, I was joined by a retired woman, Mary, who was also hiking alone. We chatted all the way back to the parking lot. She was from Kansas City and was visiting her sister who lives in Estes Park. Her sister was not feeling well and was waiting for her back at the car. I was impressed with Mary’s fearlessness. Although she did not seem to be well equipped for the hike (she wore a wimpy pair of gym shoes instead of hiking shoes and she didn’t have any water with her), Mary was energetic, cheerful, and confident. She was also quick to notice and appreciate the scenery around us.

Mary told me that before their recent retirement, she and her husband had run a dairy that produced Grade A milk. She said that although most of the milk produced at their dairy was ultimately sold for public consumption—which meant it had to be homogenized and pasteurized—her son always preferred to the drink the raw milk they kept for themselves. 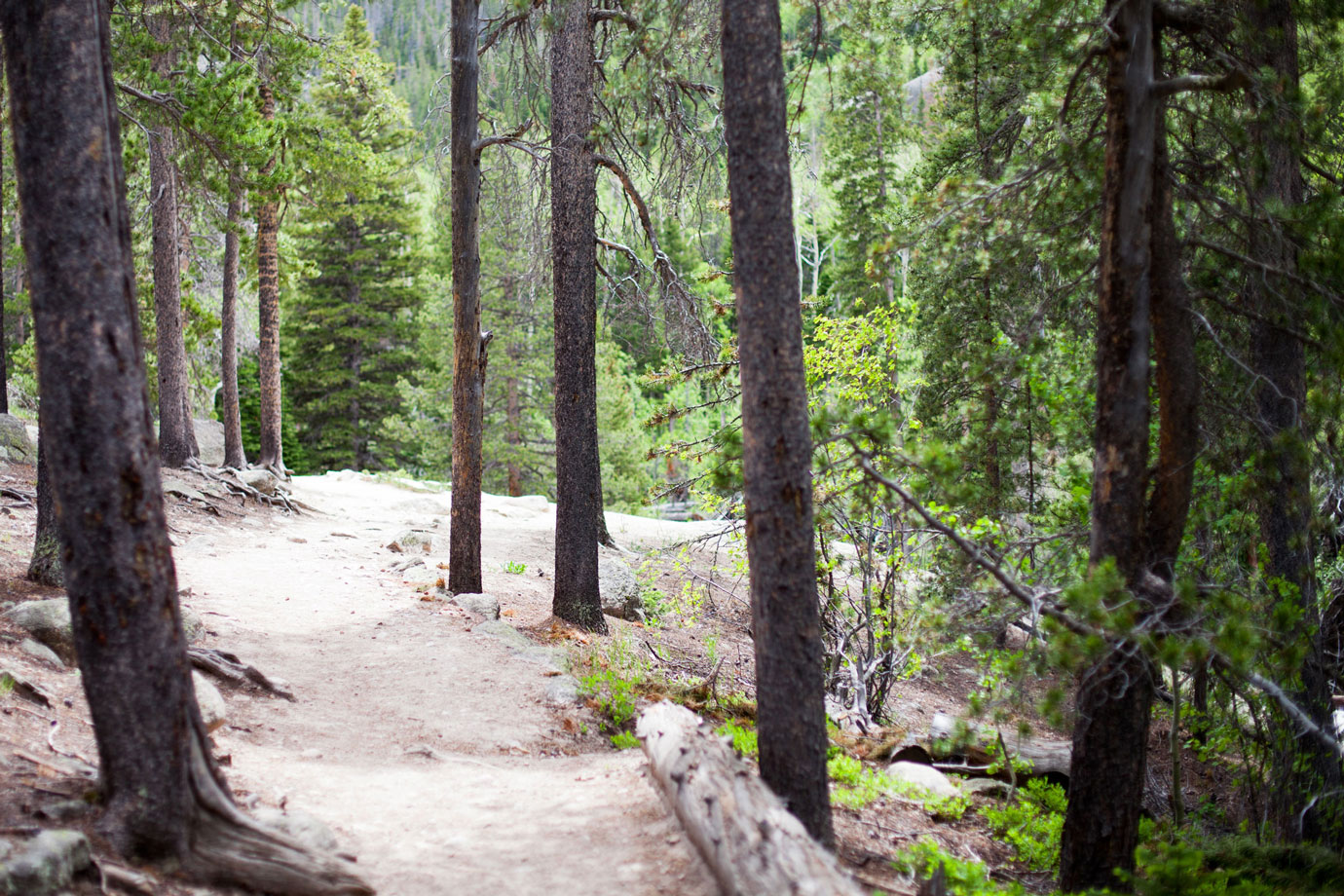 Mary said that although their dairy was now closed, they still keep a few cows for their own enjoyment. They couldn’t give it up entirely. Her husband has a couple black angus (“blacks” she called them, which are beef cattle, not dairy cows) and she has several Holstein Friesians. The only time her demeanor dimmed was when she said her husband didn’t like to travel with her and had little interest in the world beyond their hometown. She said that he doesn’t mind if she travels on her own occasionally though. After a pause, she smiled proudly and told me her husband used pretty pink ear tags when he tagged her Holstein Friesians.

By the time I had returned to my car, I was starving. I should have packed a cooler full of food to leave in the car. But I had been lazy. I was too far from Estes Park to justify driving to a restaurant there, so I drove back down to Lyons where I stopped at the Lyons Dairy Bar for a scoop of chocolate ice cream. The ice cream was superb, but next time I go hiking I must pack a nutritious lunch. 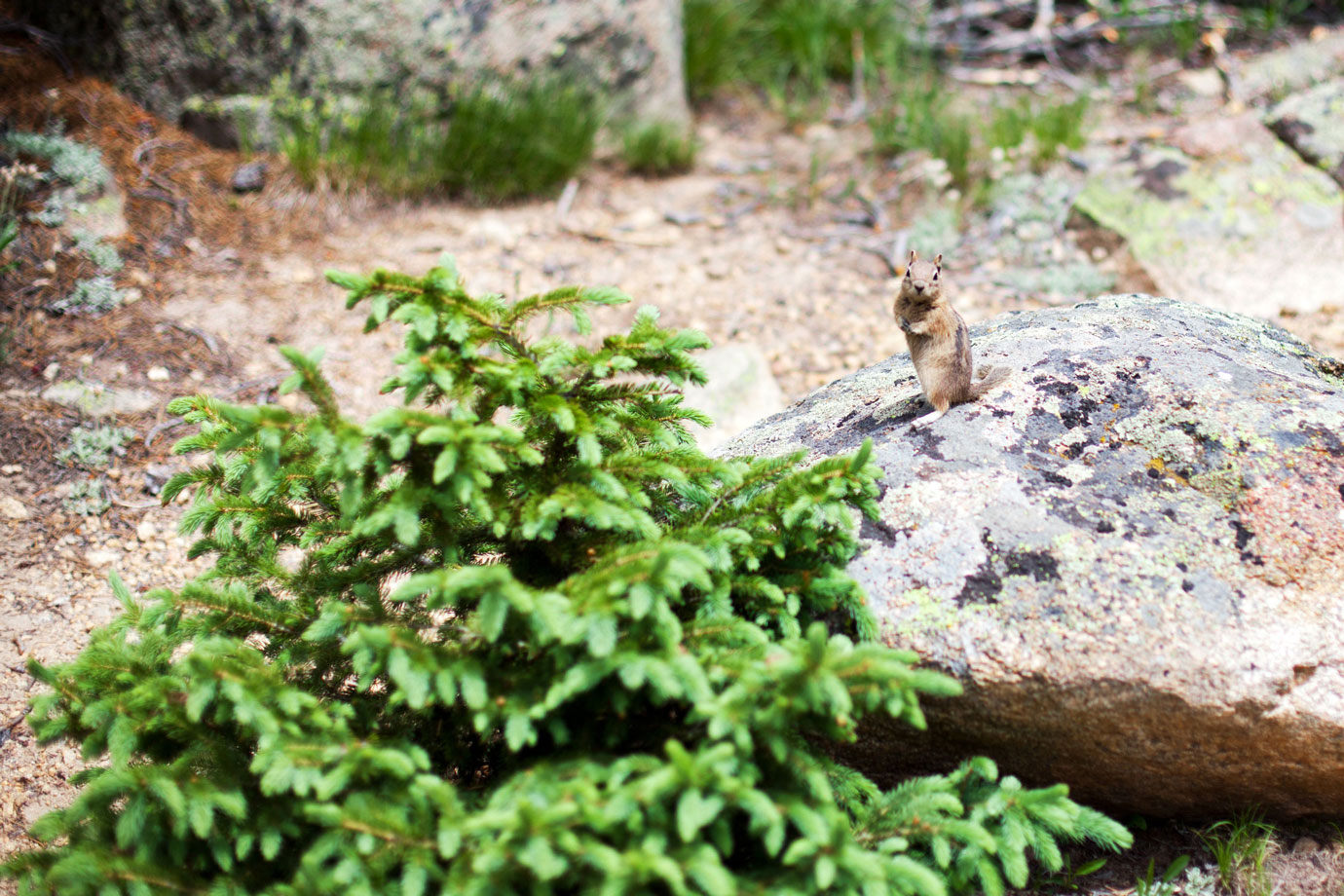 This little chipmunk was very curious and not at all shy. I think he thought I had food. Sorry Chuck. No nosh in this backpack. And Ranger says not to feed you anyway.
Tags for this entry:   hiking
« Previous · Tundra Trails
Lily Lake Summer Edition · Next »