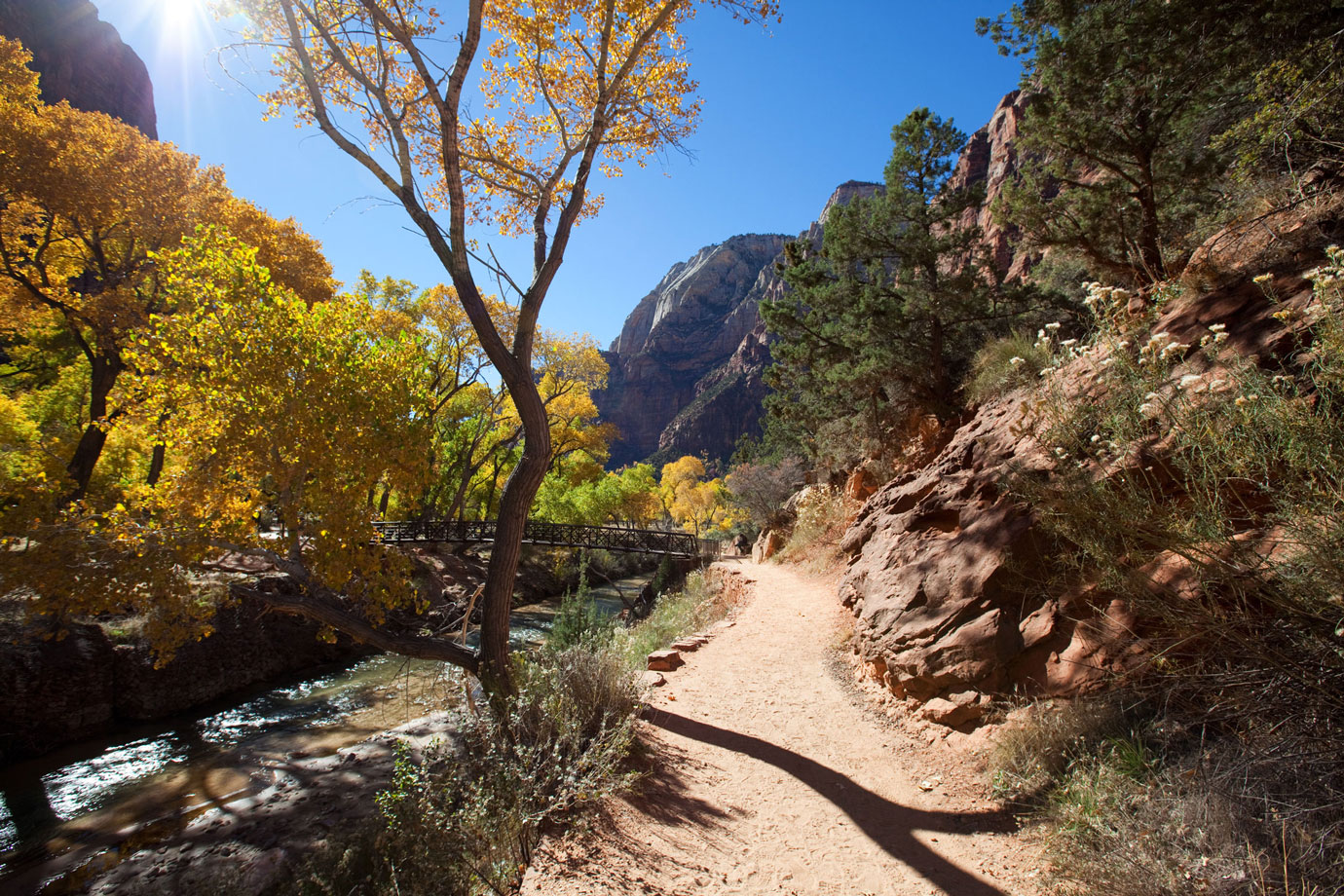 When we set out this morning, we had planned to hike the Zion Narrows as far as we could from the bottom up, starting at the Temple of Sinawava. I was trying to ingore the fact that my guidebook recommended wearing a wetsuit to hike the Narrows in November. Instead, I got it in my head that we could simply wear a thick pair Smartwool socks and our warmest hiking boots. We would then leap from one flat-topped stone to the next without as much as a splatter of cool water touching our skin. I would be the first adventurer in the history of the National Park Service to hike the Zion Narrows without getting my feet wet. 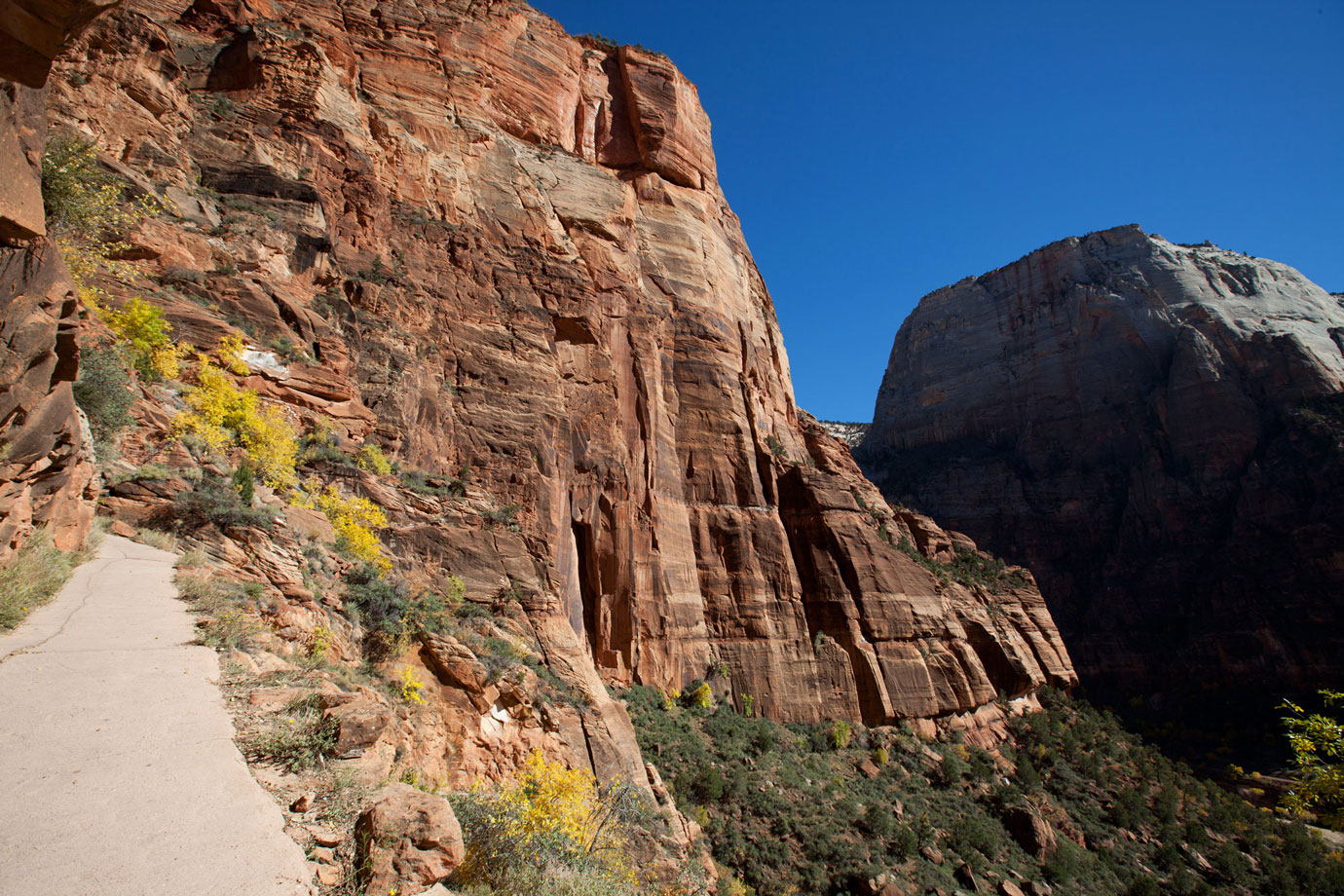 The gradual climb up the Zion Canyon wall.

Fortunately, my delusion was never put to the test. We got a sluggish start and by the time we dressed, ate breakfast and drove to the Temple of Sinawava, the parking lot was already three layers deep in Subaru Outbacks. We did the only thing we could do. We turned around and drove back to the Grotto picnic area, parked the car and set off on foot along the West Rim Trail towards Angels Landing. The Zion Narrows hike would have to wait for another time. 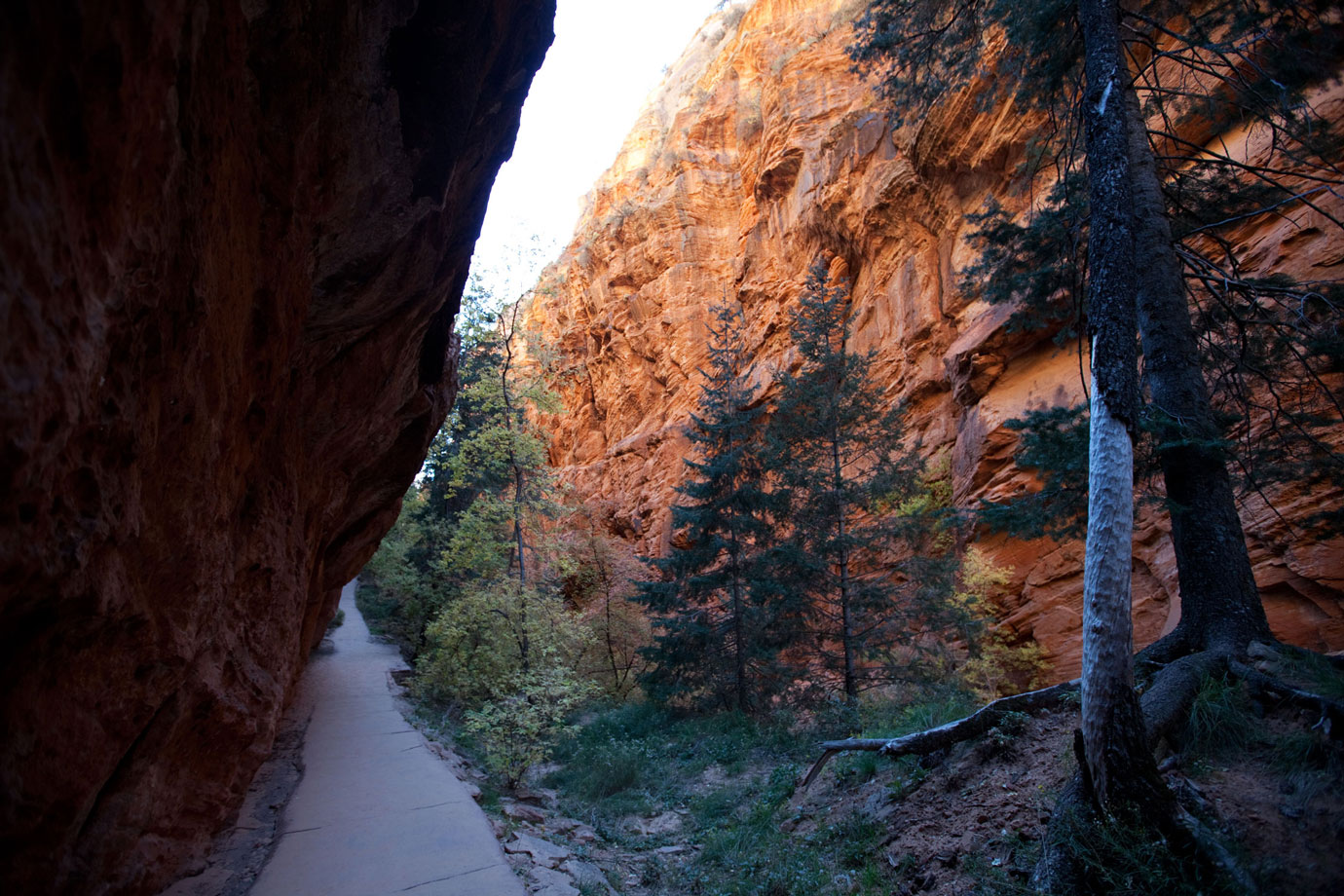 Looking up at the bright orange walls of Refrigerator Canyon.

The West Rim Trail begins at the Grotto picnic area. It crosses Zion Canyon Road and for the first half-mile follows a gentle slope through riparian woodlands of cottonwood, pinyon pines and junipers. It then grows steep as it bends back and forth along a series of switchbacks. 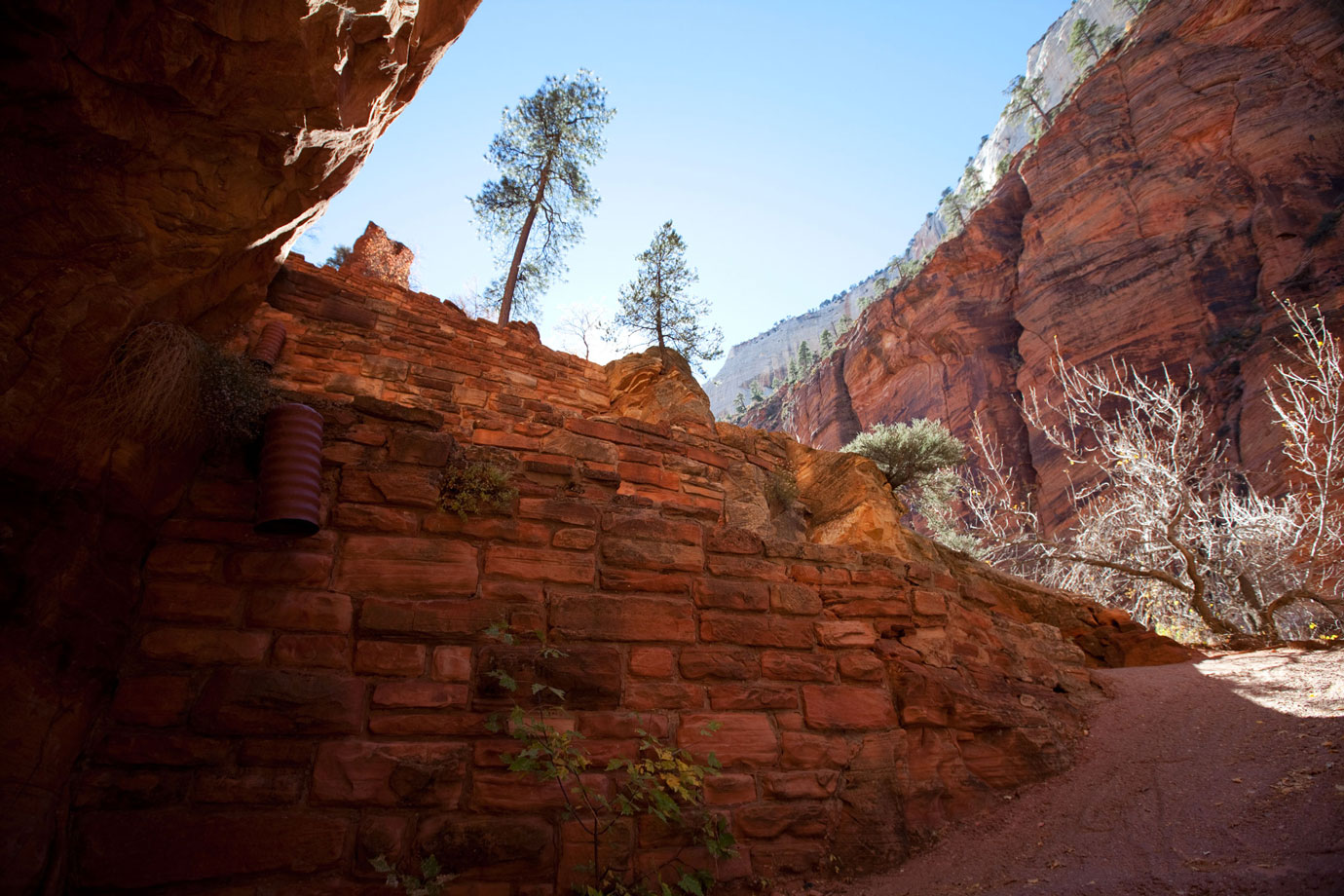 Here you can see some of the exquisite stonework that makes Walter’s Wiggles such a spectacle of trail engineering—and such a treat to climb.

This part of the hike was a scorcher. The morning sun baked the red rock canyon walls and before we knew it, sweat was streaming down our necks. It was a welcome relief when the trail turned into Refrigerator Canyon, a slot canyon where pockets of cool air waft over the trail. At the north end of Refrigerator Canyon, the trail started up Watler’s Wiggles, the series of 21 steep switchbacks that ascend to Scout Lookout. 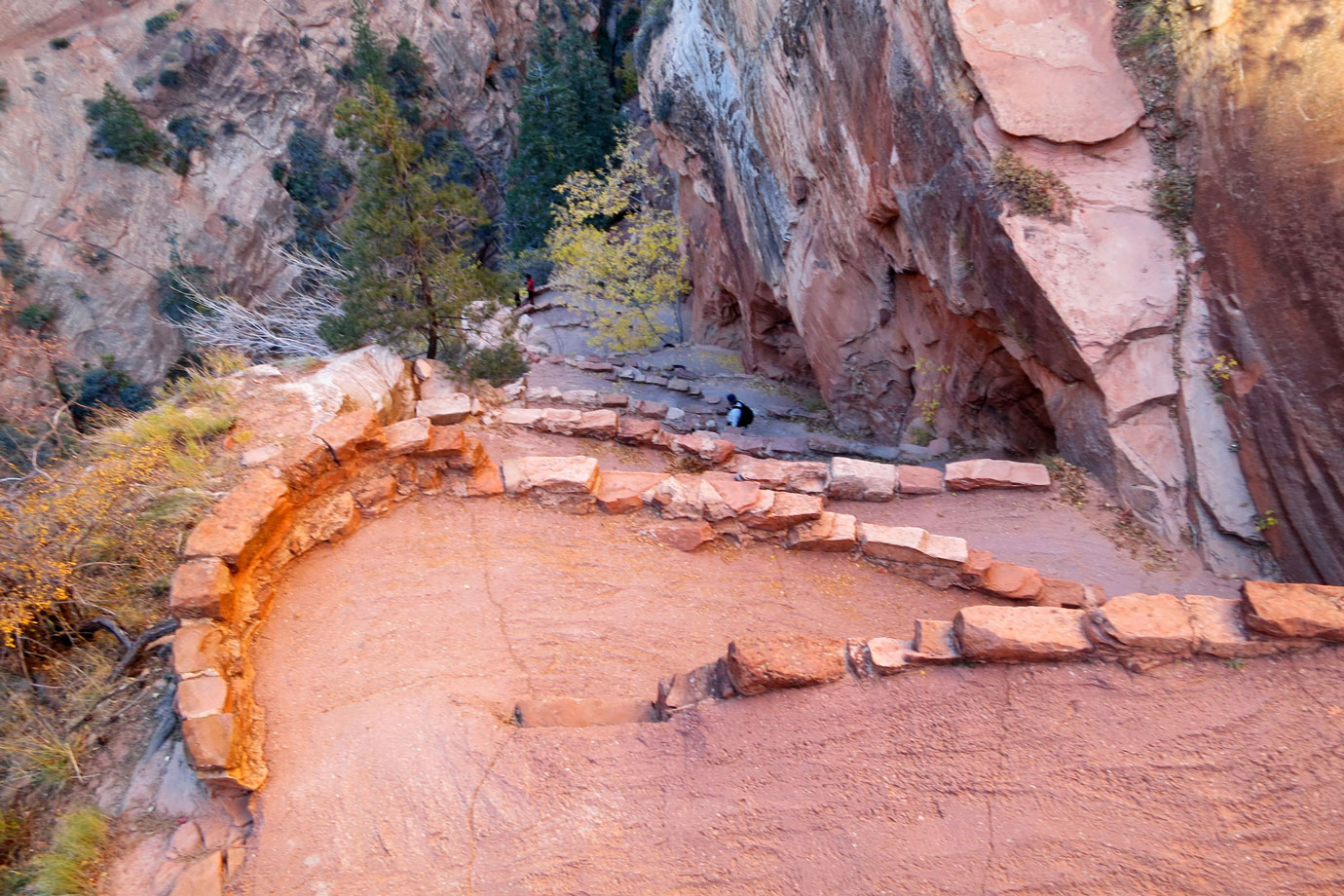 Another view of Walter’s Wiggles, this one from the top looking down. It’s an amazing bit of trail.

Once you get to Scout Lookout, it’s still another half-mile hike to Angels Landing. Actually, it’s not really a hike. It’s more of a rock-cling. To get from Scout Lookout to Angels Landing, you must traverse a narrow sandstone ridge. Trail engineers kindly anchored support chains into the rock in some places so you can cling to those instead of free-crawling your way along the spine of rock. 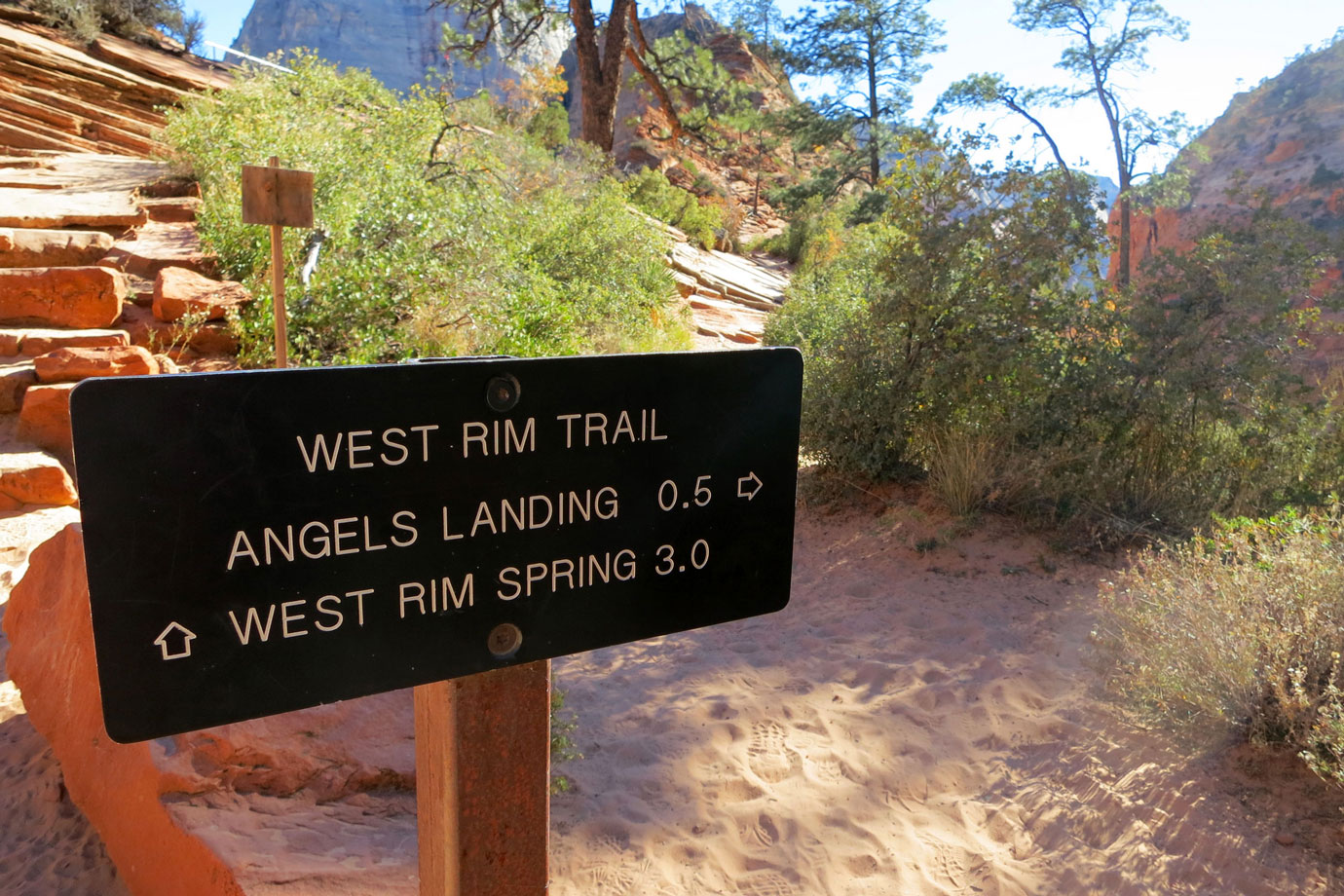 A few steps from Scout Lookout.

Considering I was well winded by the time I made it to Scout Lookout, I decided I wasn’t up to the challenge of going further. Scout Lookout was enough of a hike for us today. 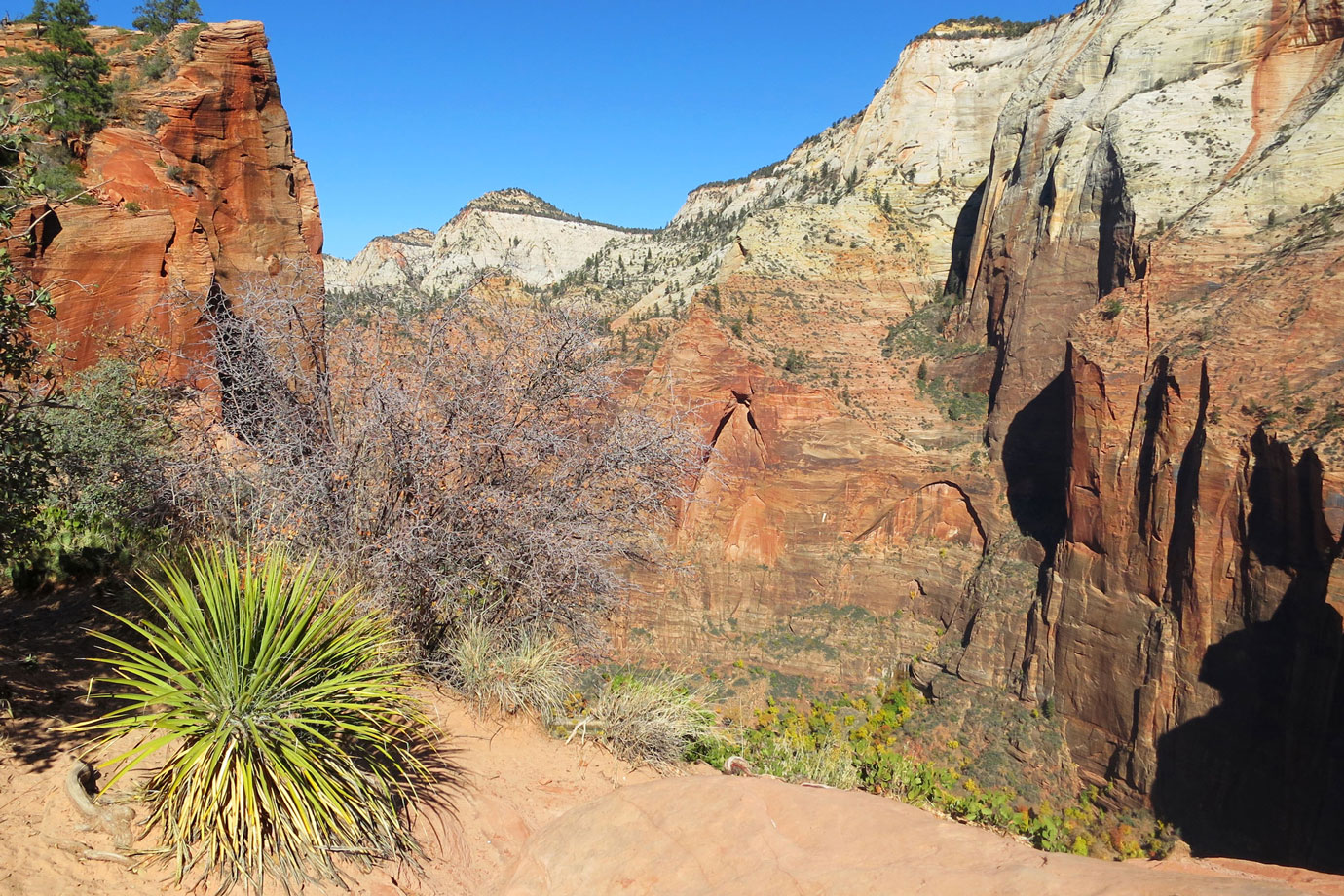 This photo fails to capture the deep valley that lies between the foreground redrock slab and the distant canyon walls. The fringe of greenery that lines the base of the far canyon wall (creating a diagonal line in the lower portion of the photograph) may look like weeds, but those are actually full grown cottonwood trees in the valley below.

The view from Scout Lookout was stunning and I thought it a shame that so many hikers rushed past this point in a frenzy to get to Angels Landing. We stayed at Scout Lookout for a while enjoying the views into the depths of Zion Canyon below before turning around to hike back down to the Grotto. 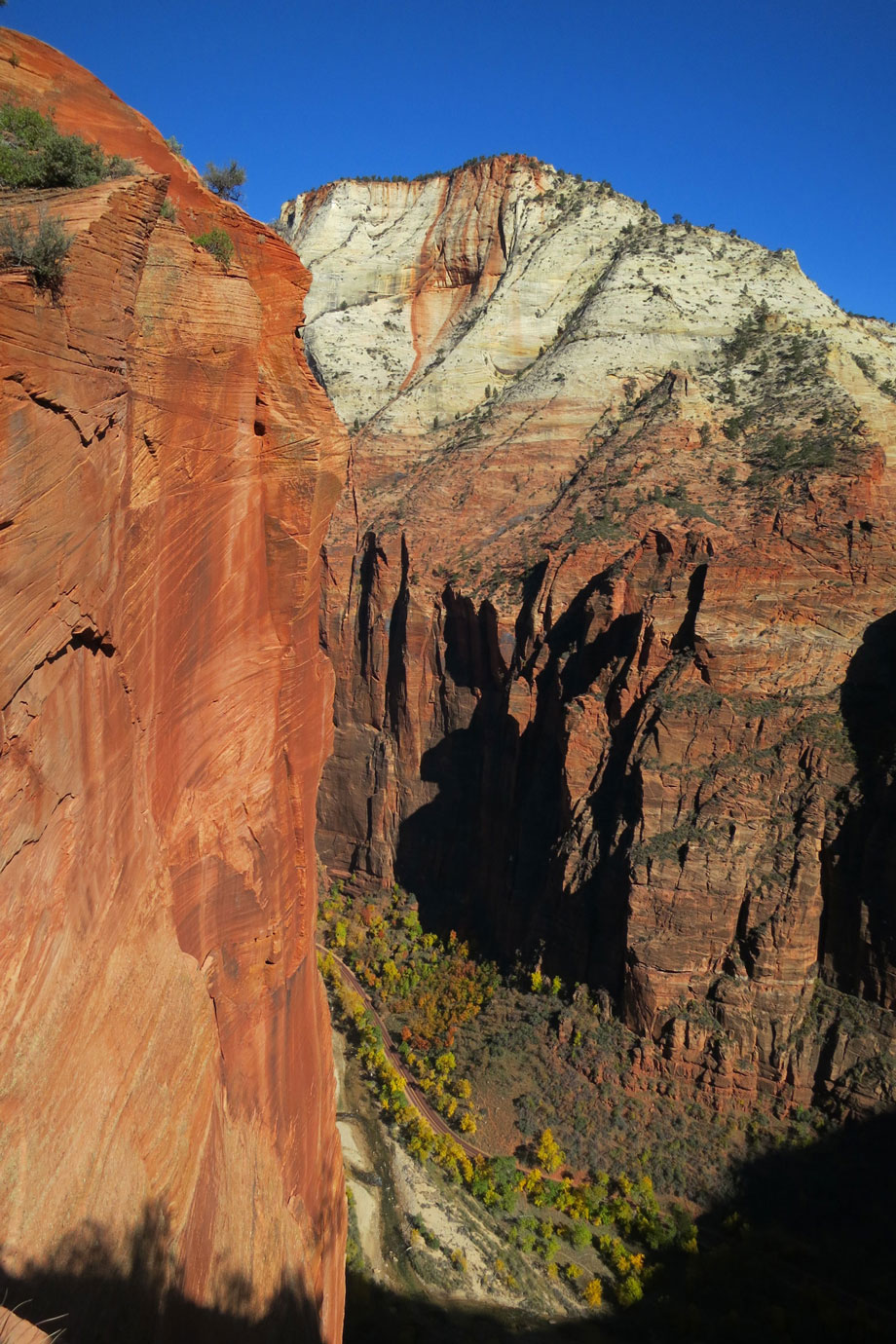 This is that abyss that was hidden in the previous photograph.
Tags for this entry:   canyons · hiking
« Previous · Emerald Pools
A Very Long Year · Next »

My hairstylist swam the English Channel today. I’m tremendously impressed. She took up swimming just a couple of years ago and now she’s bagged a world-class marathon swim with efficiency and finesse.

So far on this vacation, I’ve done little more than sit in the car, play Wasabi Sudoku on my iPad and hobble from one gallery to the next along the length of Canyon Road.