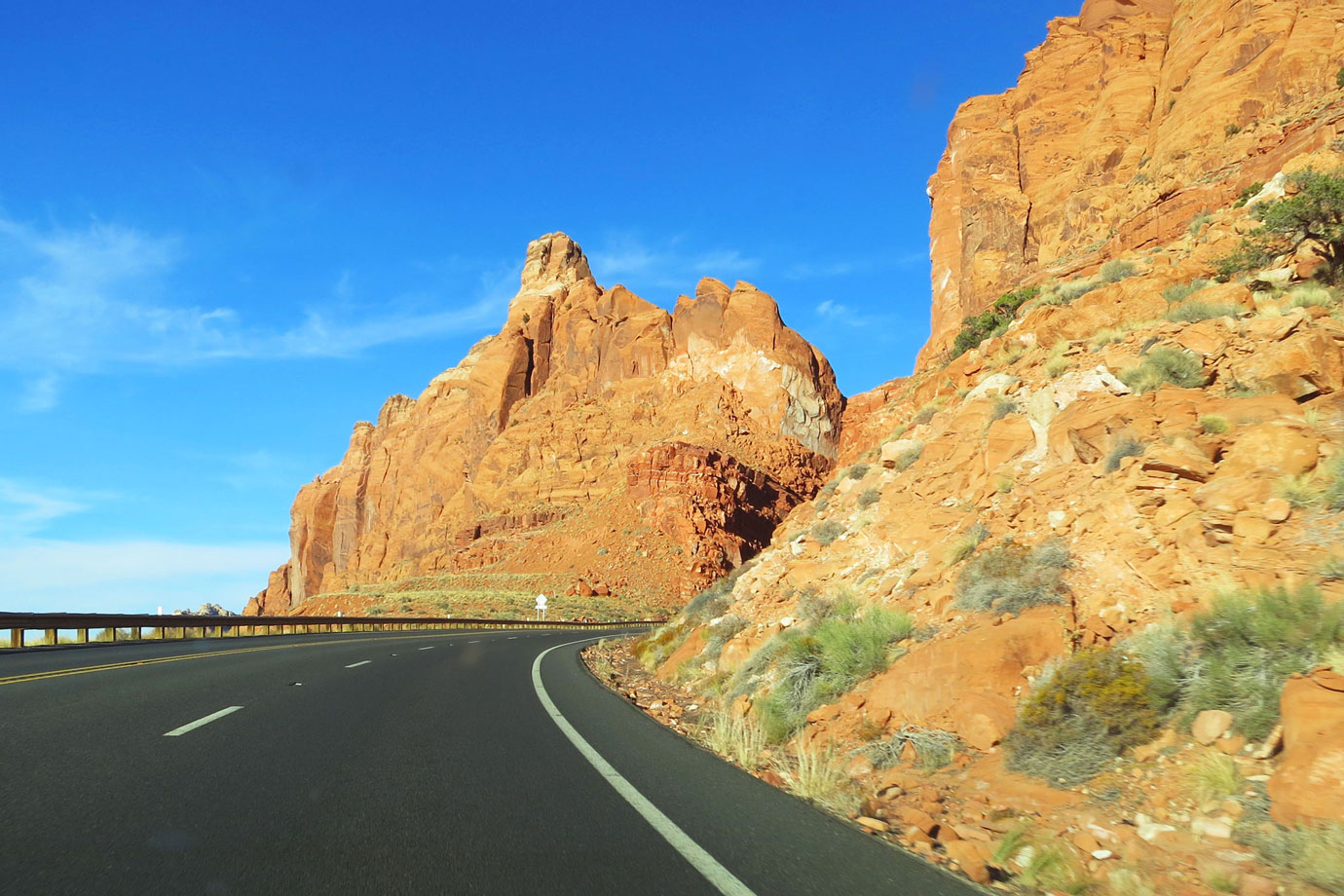 On Sunday we get a slow start. We eat a leisurely breakfast and wander around Flagstaff for a while, exploring a few places we have yet to see. We go back to the shop at the Museum of Northern Arizona so I can pick up a copy of the Elote Cafe Cookbook I talked myself out of buying yesterday. Consequently, it is near two o’clock by the time we hit the highway. Five hours of road lie before us. It’s not our longest drive of the trip, but it also isn’t the earliest of starts. 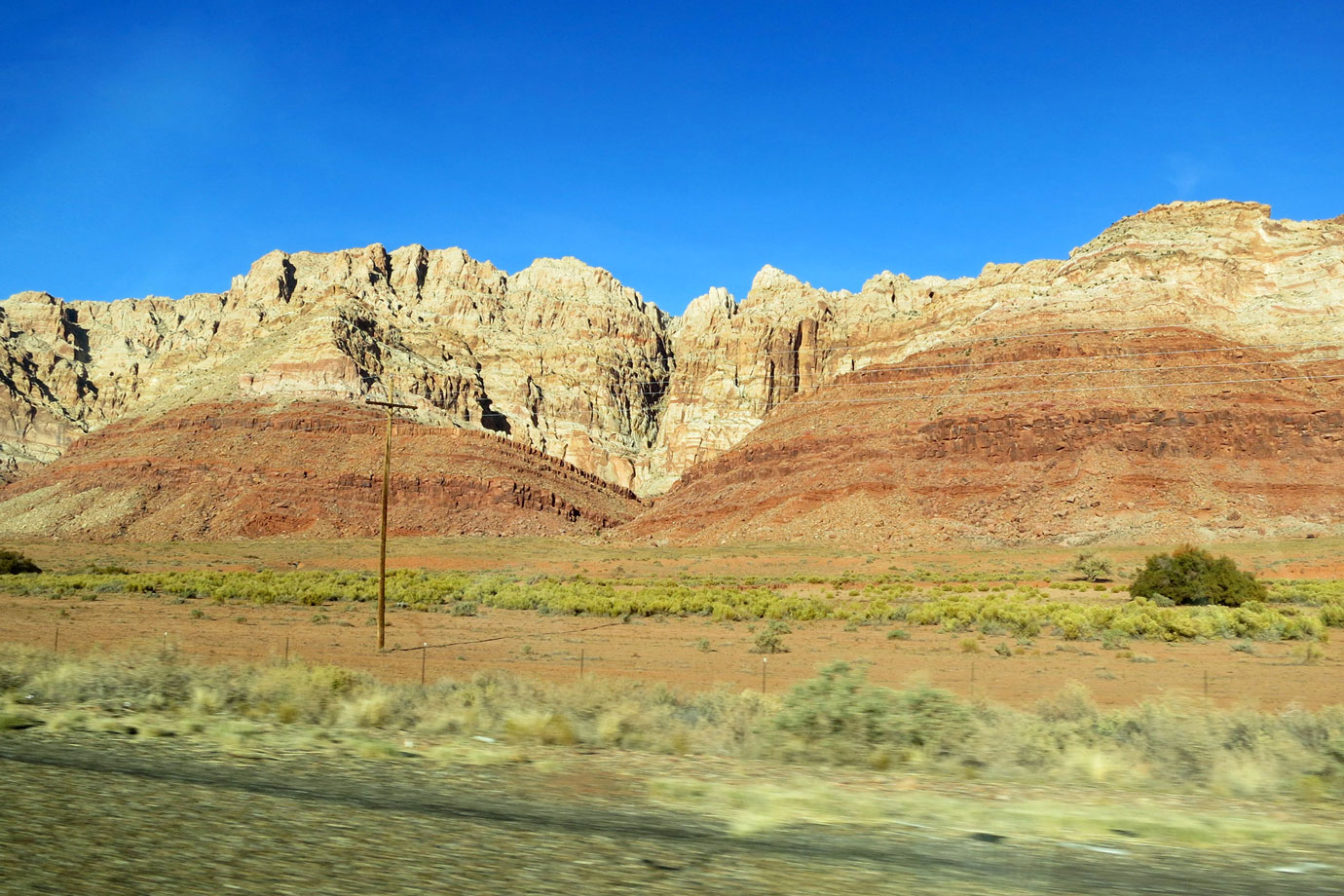 We drive north out of Flagstaff on US Route 89, which takes us past Humphreys Peak, Tuba City and the Painted Desert. We drive through the tiny town of Page, Arizona where the road turns west, skirts the south shores of Lake Powell, crosses the Colorado River and slips quietly into southern Utah. I trace our route on the map and notice we are driving along the southern edge of Grand Staircase Escalante National Monument. I look to the north at the vast terracotta escarpment that parallels the road. A dozen miles pass in this manner. I knew little about the area’s geology and have no clue what I am looking at. 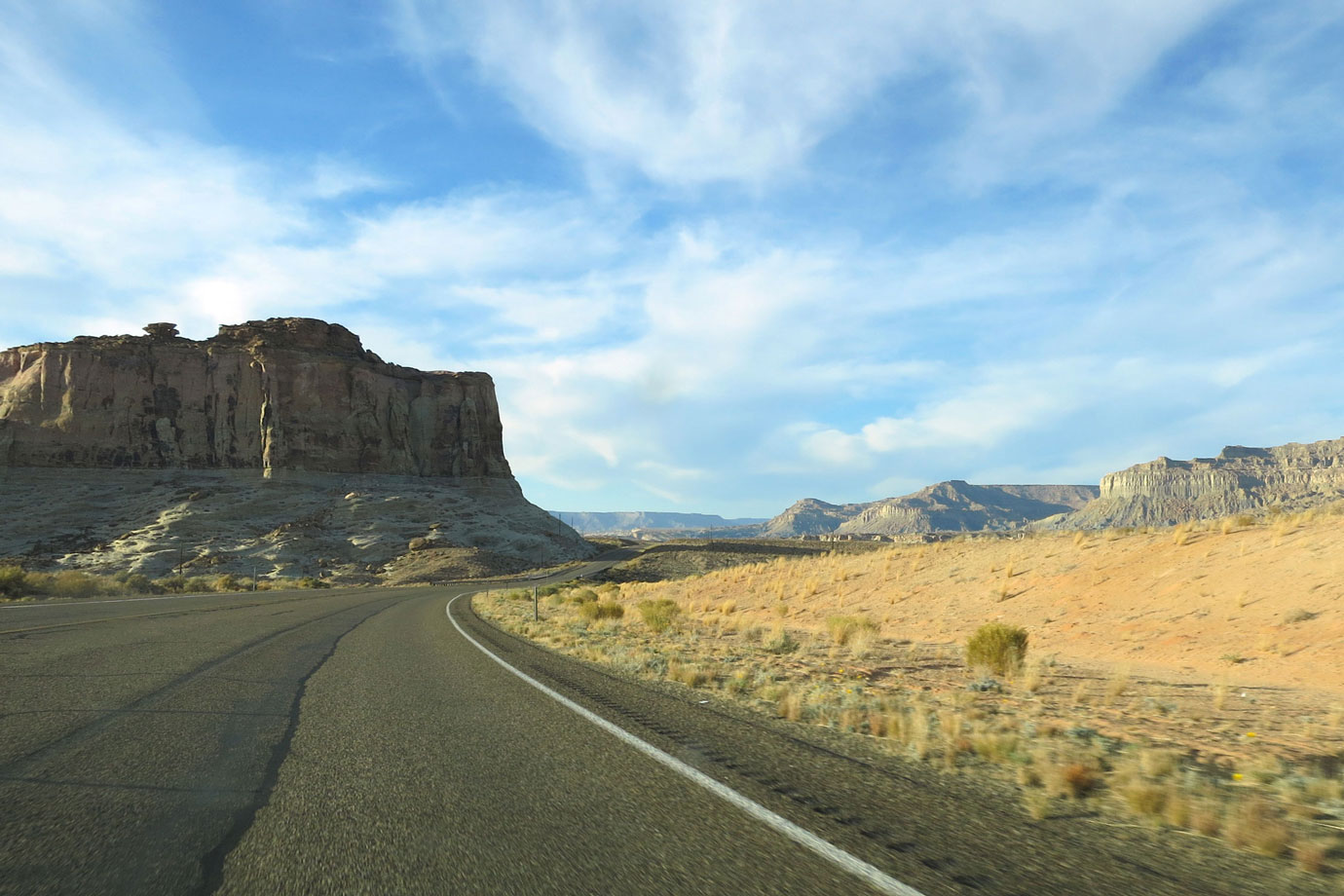 We continue on Route 89 to the Mount Carmel Junction where we pick up Utah State Route 9. Somewhere along Route 9 my TomTom decides to lose all sense of reality. For a good twenty minutes, it cannot compute where we are and splays the frantic message REPLANNING REPLANNING REPLANNING across the screen. When it finally gets its bearings, it tries to convince us to turn onto a road that didn’t exist. In the end, we unplug the TomTom and improvise our way to the east entrance of Zion National Park. 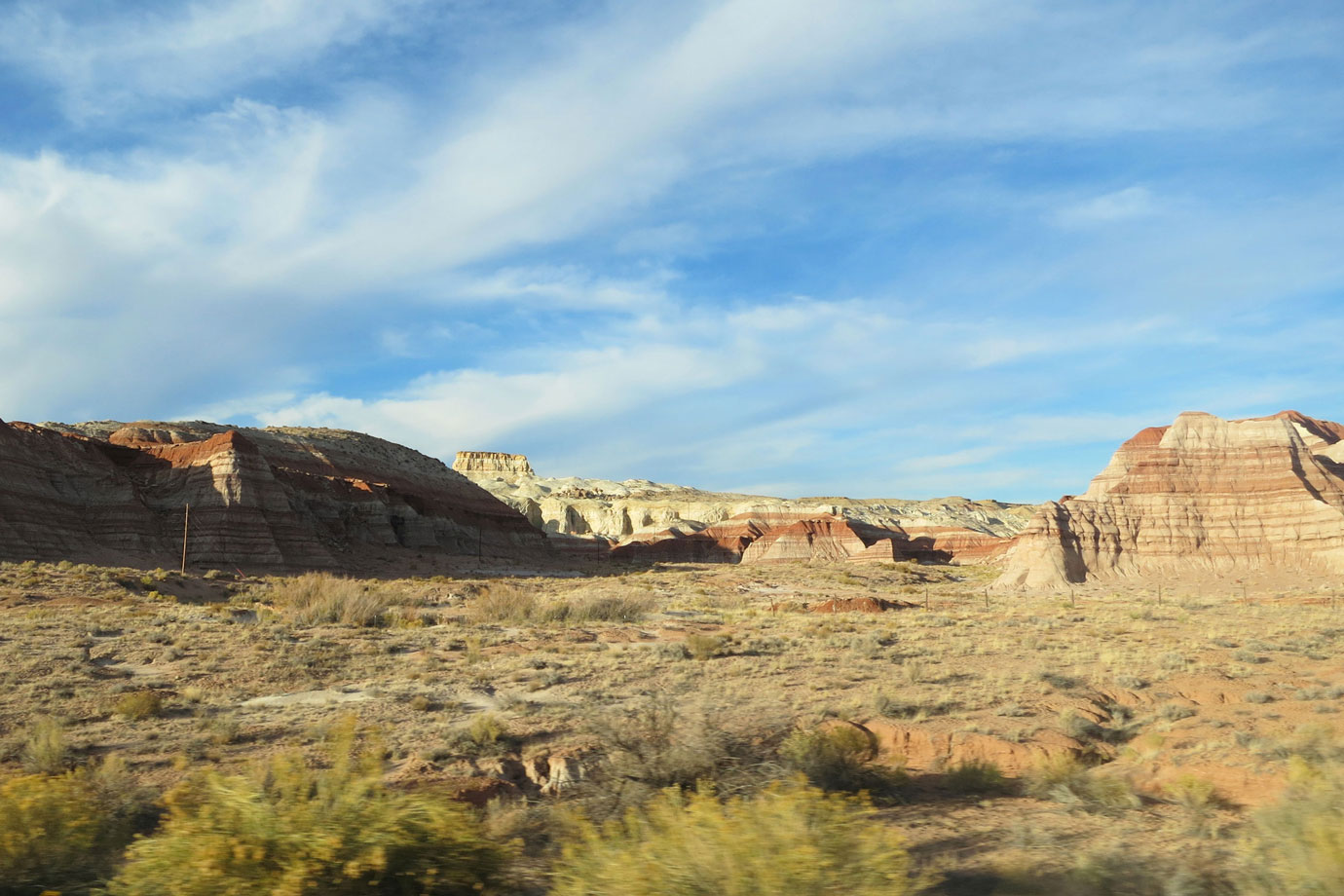 By the time we get inside the park, the sun had set. We drive the winding canyon road to Zion Lodge in inky blackness. The narrow cone of light our headlights emits reveals a winding ribbon of red pavement. It seems to take hours to get through the park to Zion Lodge. When we finally arrive we were exhausted. Fortunately, the lodge is lovely and comfortable and a welcome oasis after the long trek. 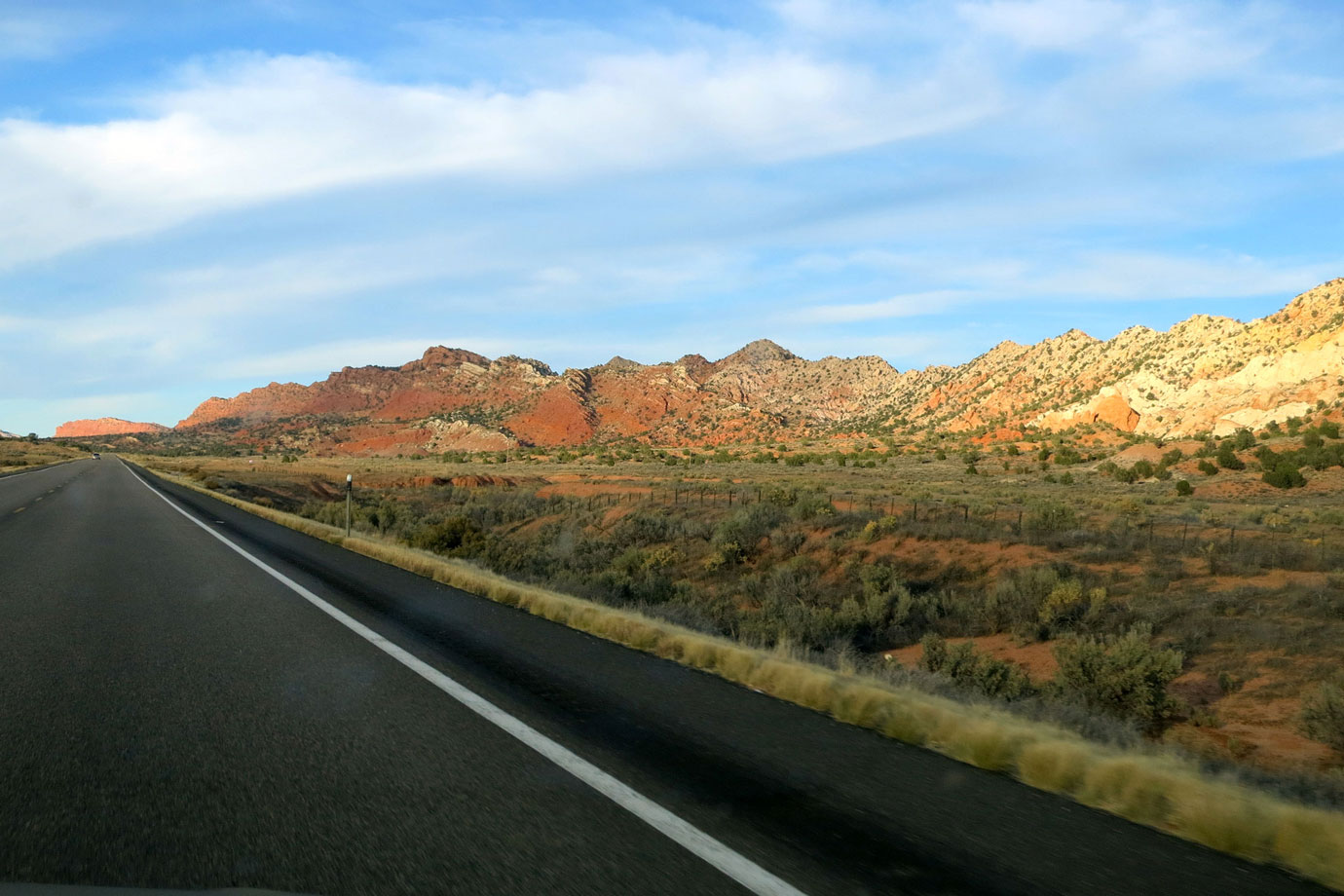 It isn’t until days later that I look up information on Grand Staircase Escalante National Monument. I discover the monument gets its name from a vast rock formation that stretches from Bryce Canyon southwards to the Grand Canyon. The region, known as the Grand Staircase, consists of a sequence of sedimentary rock layers that have been eroded away one-by-one to form a progression of immense steps. The rock layers end in a progression of large cliffs that drop away to expose still deeper, older layers of rock. The series of ledges we saw on our drive from Flagstaff to Zion were all part of the Grand Staircase.

Although there are, in total, about two dozen layers of sedimentary rocks that make up the Grand Staircase, it’s easier to remember the names of the five major escarpments they form as one grand step gives way to the next. From south to north these cliffs include the Chocolate Cliffs, Vermillion Cliffs, White Cliffs, Grey Cliffs and Pink Cliffs. As the layers and cliffs peal away the closer you get to the Grand Canyon, older rocks climb progressively closer to the surface. The result is that the oldest exposed rocks in Zion National Park—those that lie at the deepest layers of the canyon—are, by the time they reach the Grand Canyon, the topmost (and consequently the youngest) of all the exposed rock layers in the Grand Canyon. Similarly, the topmost layer of rock in Zion Canyon is, by the time you get to Bryce Canyon, the deepest layer of rock. 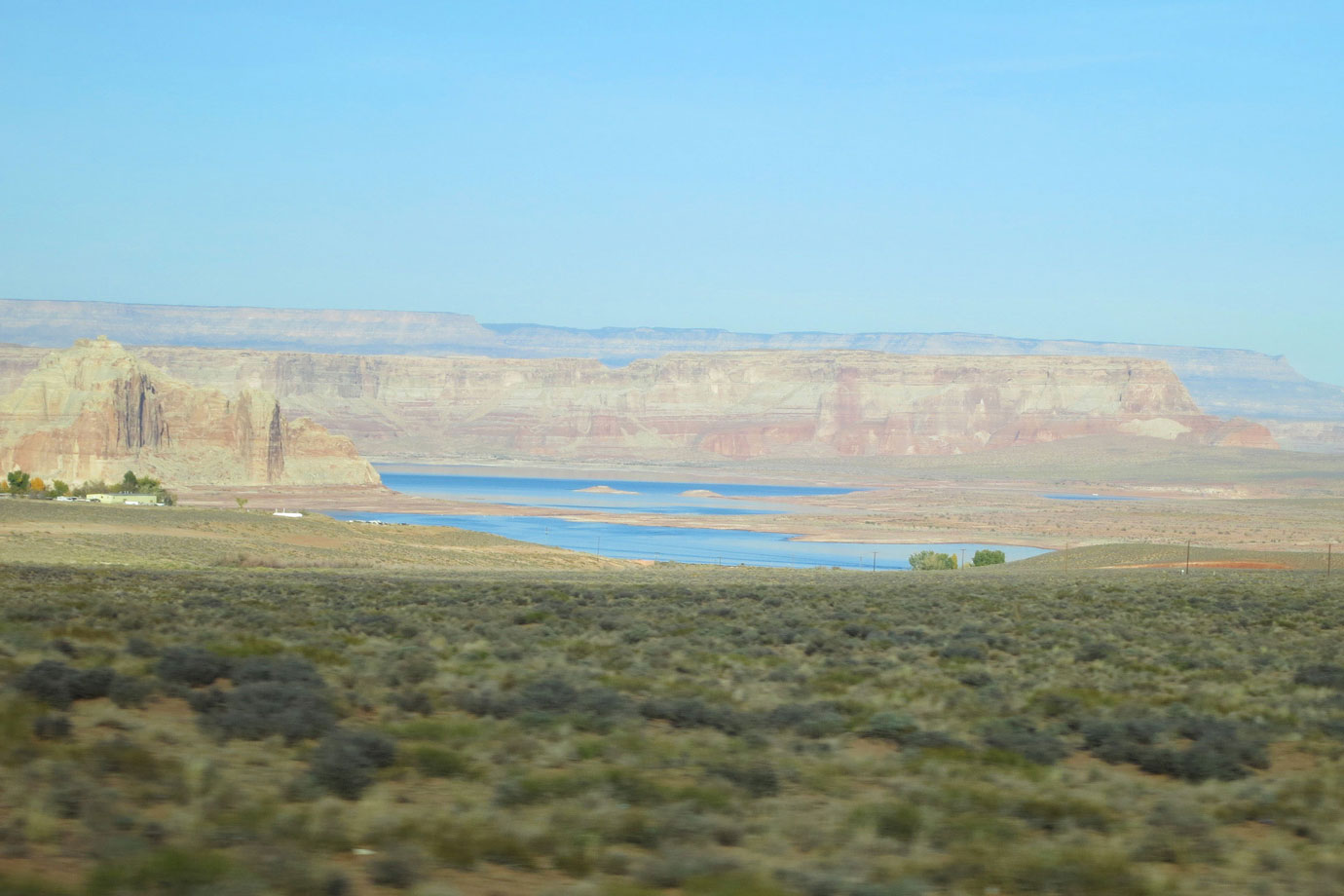 On February 20, a 150-foot section of US 89 near Page, Arizona buckled and collapsed after a landslide dislodged a large chunk of the slope beneath the road. Based on the information I read, the landslide took place early in the morning and there were no injuries. But it still makes me sad to think a road I so much enjoyed driving on has been temporarily laid low. You can find more info about the road collapse and current conditions here: http://bit.ly/XnVieG

US 89 south of Page repaired and open to traffic
Tags for this entry:   driving · geology
« Previous · Sedona
Shoulda Woulda Coulda · Next »