Island in the Sky—a vast slab of rust-tinted sandstone 1,000 feet higher than the surrounding landscape—is not the ideal place to find yourself during a lightning storm. That fact becomes clear to us as we drive atop it, along Utah State Route 313—also known as the Dead Horse Point Mesa Scenic Byway. As we approach the northeast entrance of Canyonlands National Park, thunder begans to rumble and streaks of lightening crackle and pop across the sky. Within minutes the weather turns from mild to mean. The air is electric, the wind is angry and there is nowhere to hide. 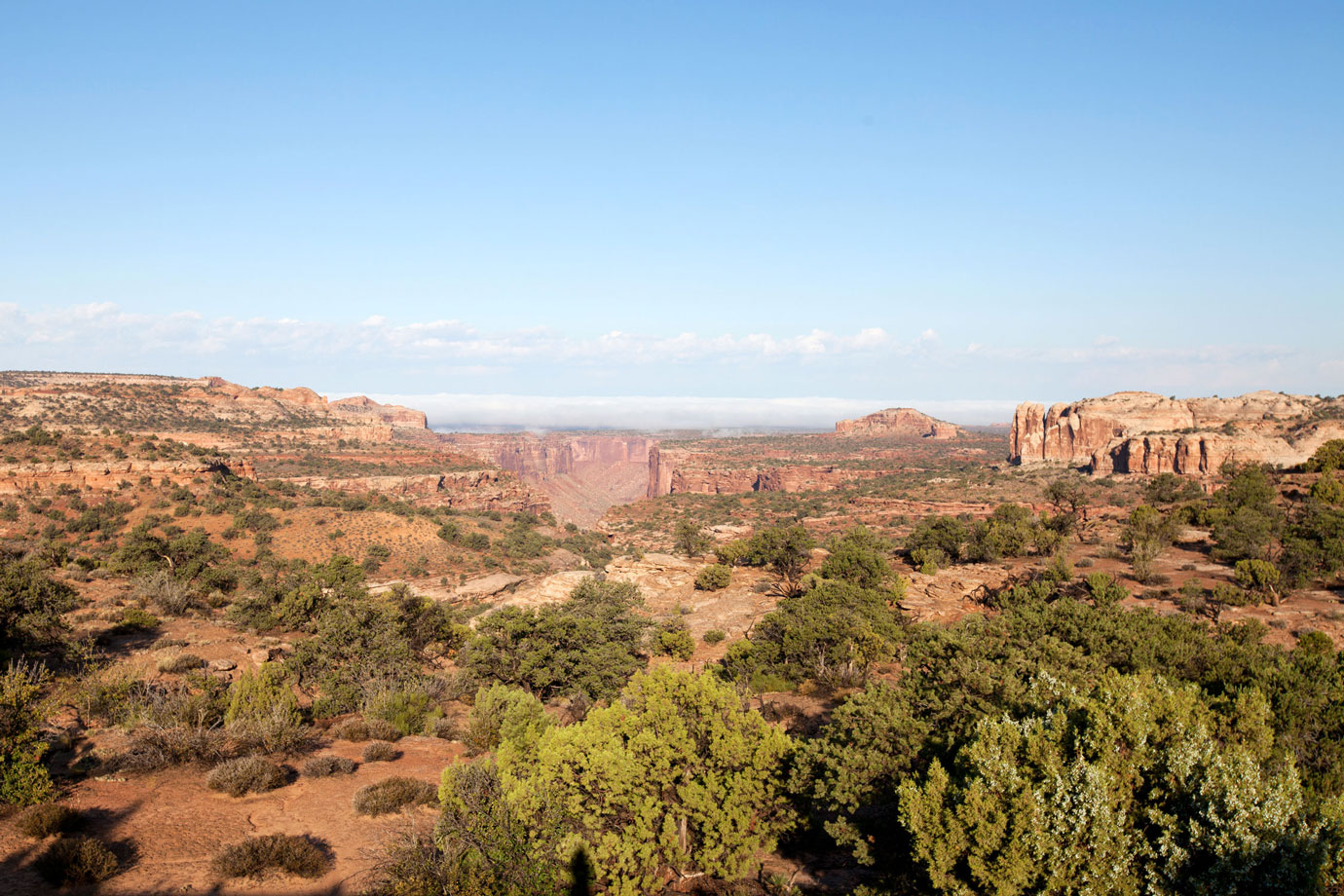 It is late Wednesday afternoon—the last day of our visit in Moab—and we are supposed to be enjoying some leisurely, scenic hikes in Canyonlands National Park. Instead we are the only car rattling along an exposed stretch of road that seems to have no end. We scan the horizon nervously and curse the fact that our car is the tallest object on the plateau. I frown as I try to recall the finer details of what, allegedly, makes a Faraday cage safe. 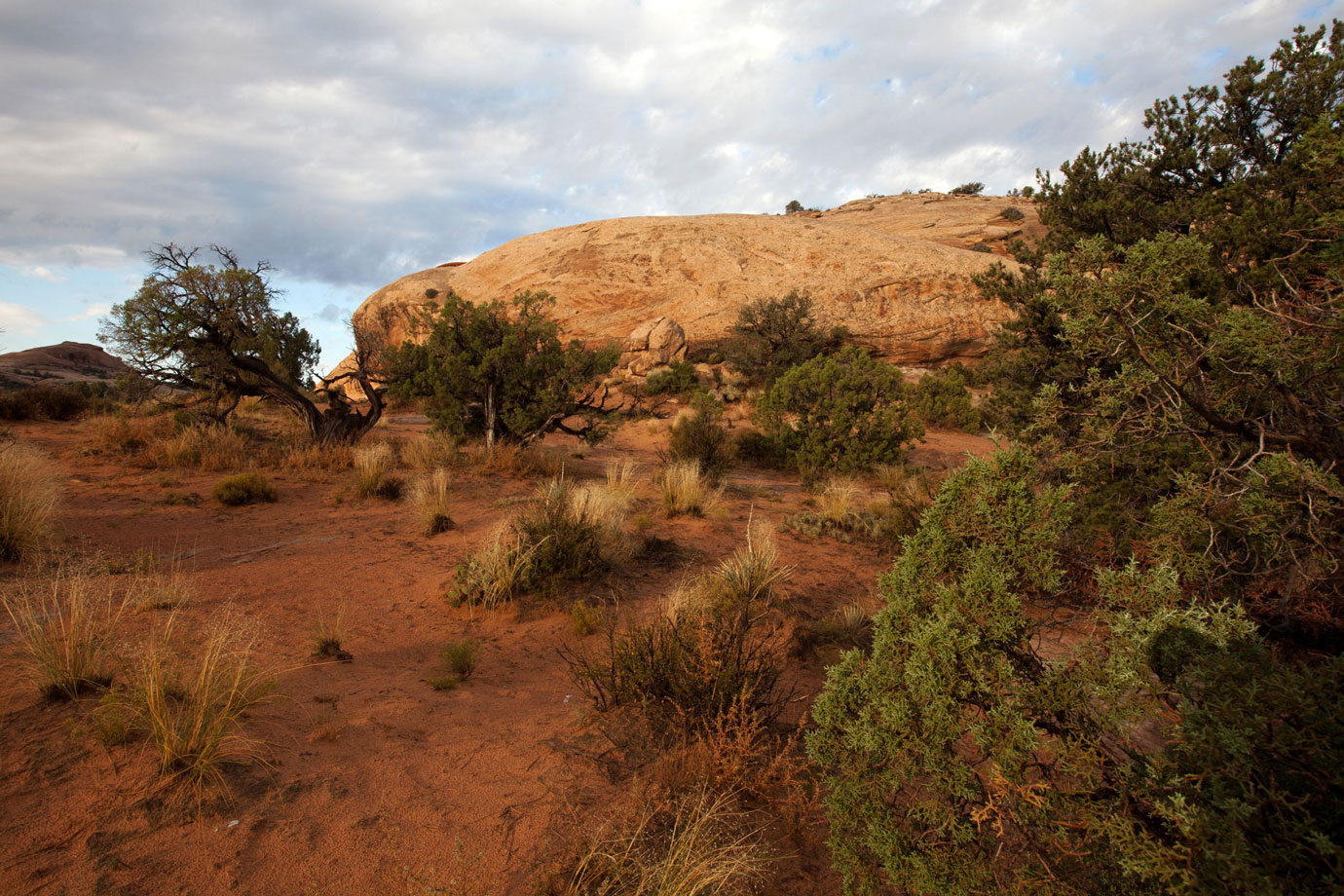 It wasn’t supposed to be like this. We had planned it all perfectly—we would explore Canyonlands for several hours, return to town for dinner and then go back to the hotel and pack. Then, bright and early Thursday morning, we would load up the car, check out of the hotel and begin our long drive home. According to this schedule, there was no time for a rogue thunderstorm to whip its way across the canyon. There was no time for unstable air masses, flash floods and atmospheric pyrotechnics. Didn’t the weather know we had an itinerary to adhere to? 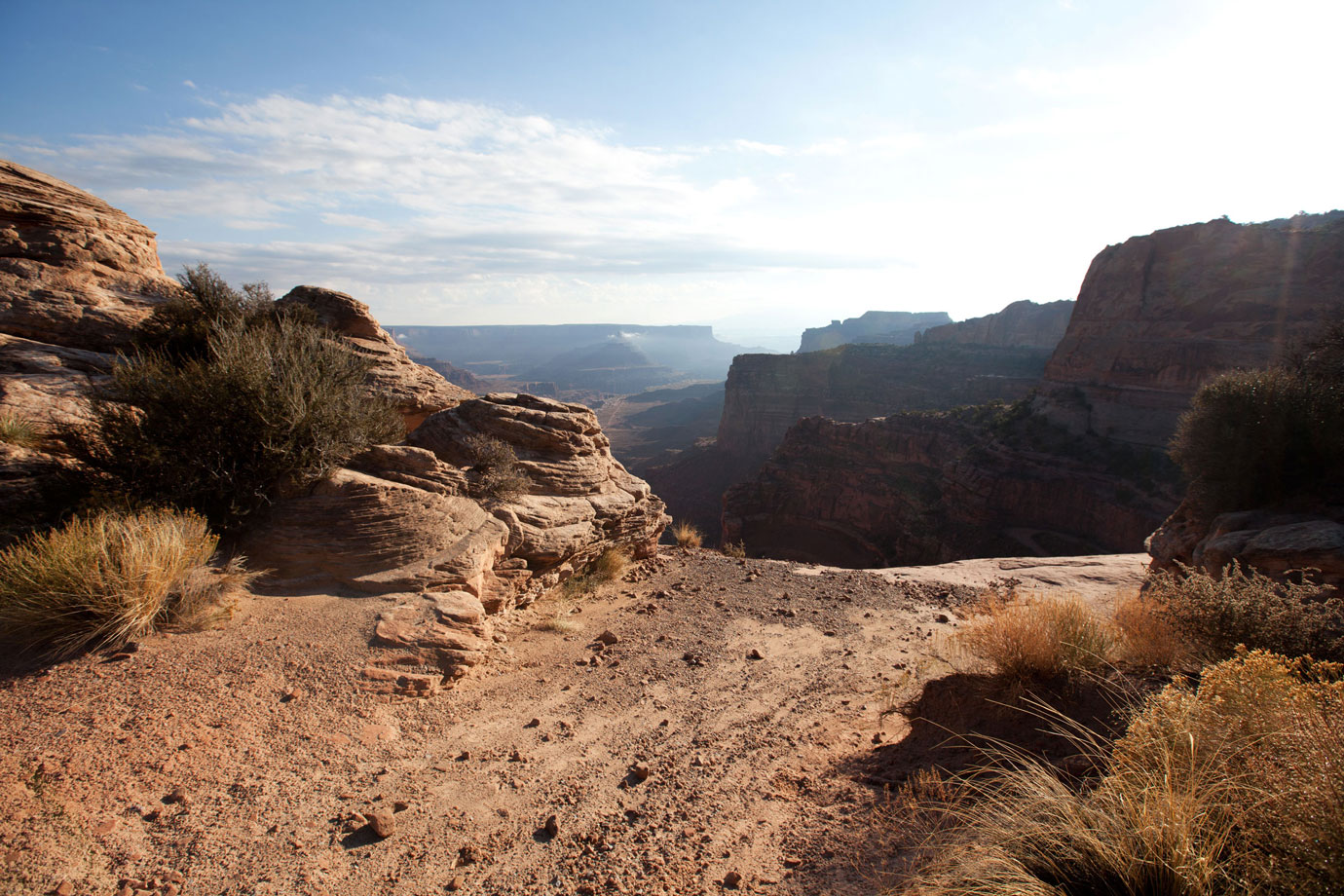 Finally, after a particularly vivid lightning bolt split the sky ahead of us, we decided it was time to abandon our sightseeing plans for the day and return to Moab. Canyonlands would have to wait for another day, another vacation.

As we drove back to the hotel, we got a better glimpse of the storm’s strength. Gusts of wind shoved our little tan Toyota from one lane to the other as if it were a matchbox car. Sheets of rain scoured red dirt from the roadside, sending it over the pavement in shallow rusty waves. We passed an RV at the side of the road—it had been tossed on its side, shipwrecked by a gust of wind. A rescue crew encircled the RV, helping to calm the disoriented vacationers who had been piloting the stricken craft. 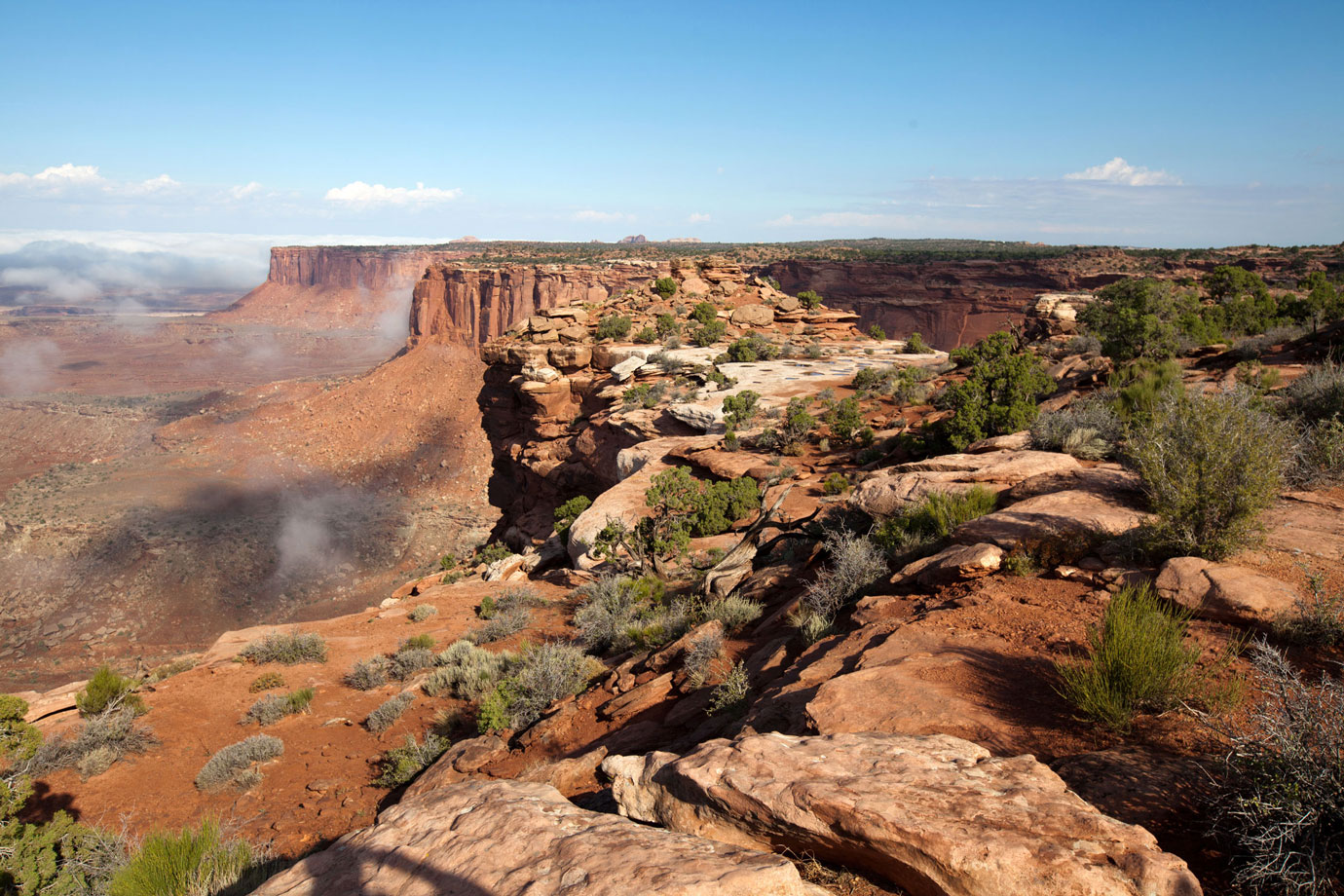 By the time we got back to Moab, the rain had stopped and the clouds were breaking up. The early evening sunlight glowed. We had dinner, packed and went to sleep. Thursday morning, as planned, we loaded up the car and checked out of the hotel. As we were driving out of town, we decided to give Canyonlands one more try. Just a quick look.

Those were, of course, famous last words. We spent the better part of the morning driving through Canyonlands, stopping for short hikes and photos along the way. The thunderstorm that had thwarted our first attempt to explore Canyonlands made our second attempt all the more beautiful. The rain had left bunch grasses, lichens, mosses and liverworts dripping with color—greens, ochres, yellows and siennas. Even the evergreens—the pinyon pines and the Utah junipers—had been refreshed and brightened by the downpour. 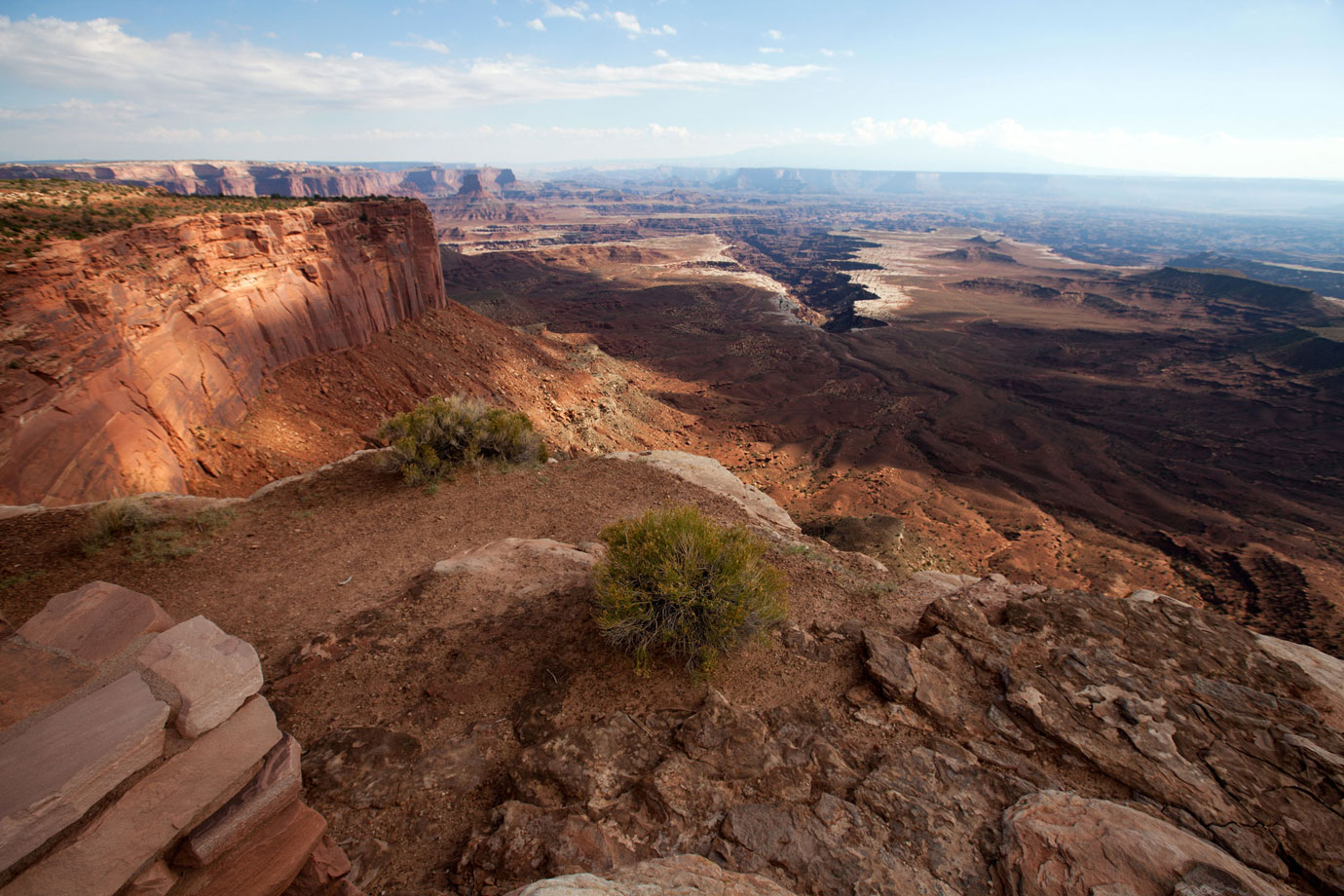 We drove to Grand View Point Overlook and watched as great clouds of cool damp air rippled and sank in Monument Basin. Occasionally a breeze would push a pocket of fog out of the basin and onto the top of the mesa where it would envelop us and then evaporate in seconds as it hit warmer air. It felt as if we were standing on a great slab of rock that was drifting through the sky, dipping in and out of clouds as we cruised through the air. I guess that’s why they call it Island in the Sky. 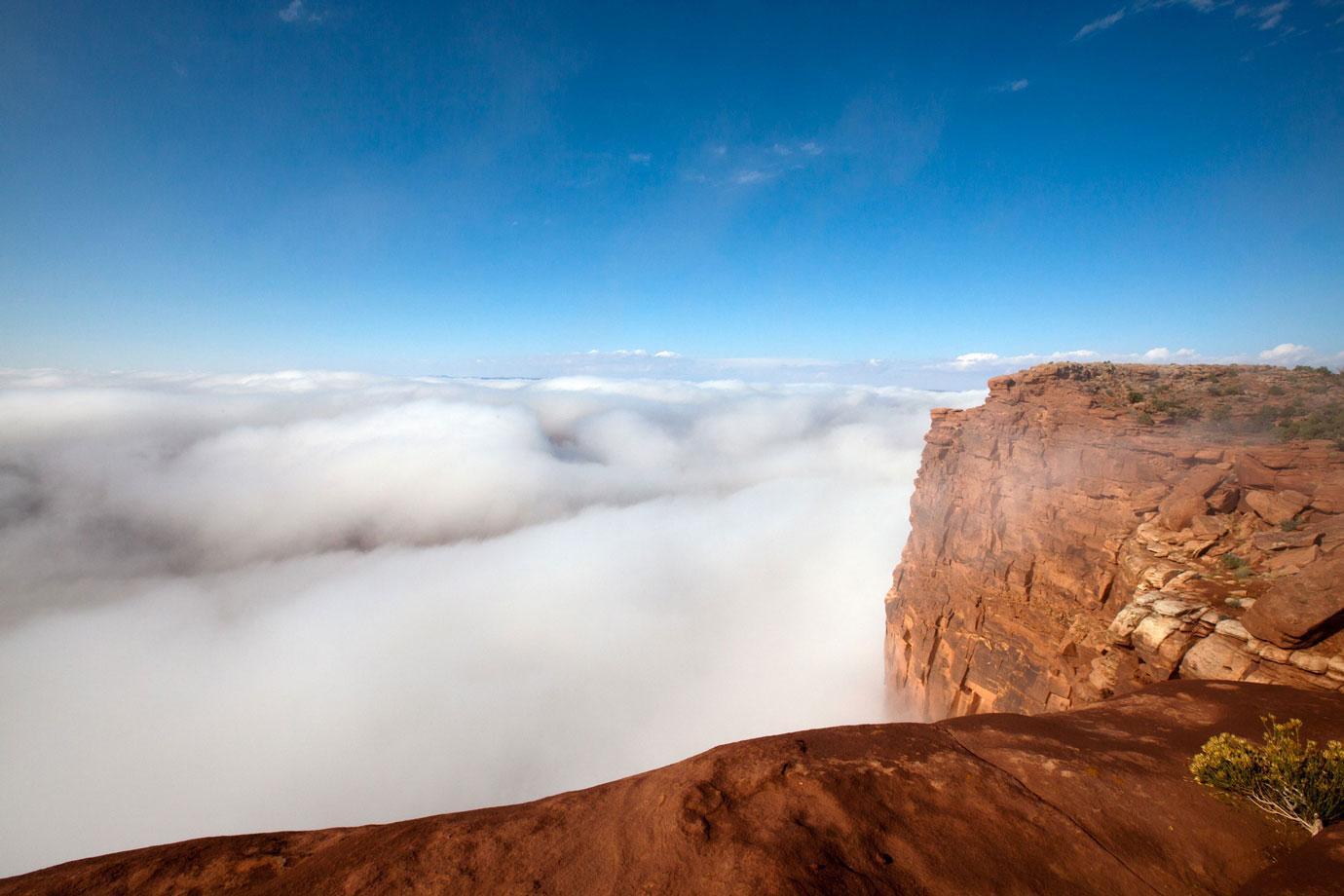 We made several other stops—Buck Canyon Overlook and Whale Rock and Aztec Butte. We hiked to Mesa Arch—a low, wide arch that sits on the edge of the plateau overlooking the White Rim and Monument Basin. There was so much to see it was difficult to take it all in and impossible to rush through the park. But we had many hours of driving ahead of us. Finally around lunchtime, we drove out of Canyonlands with many sights left unseen. It was a long, late drive that day to Colorado Springs, but I’m so glad we paused for the morning to give Canyonlands a second try. 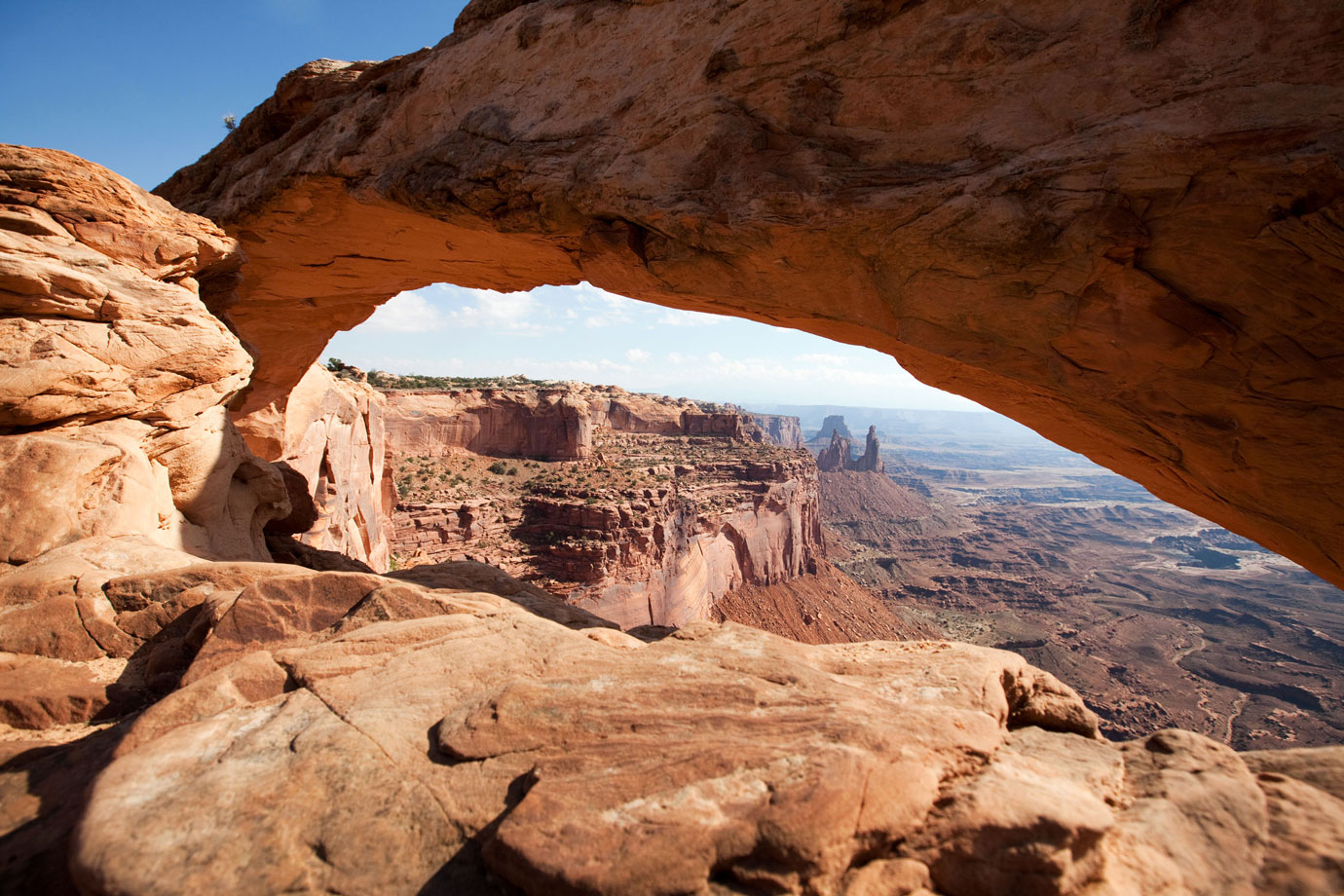 Climbing the waterfall was a little tricky … … but it wasn’t as difficult as I had feared it might be.