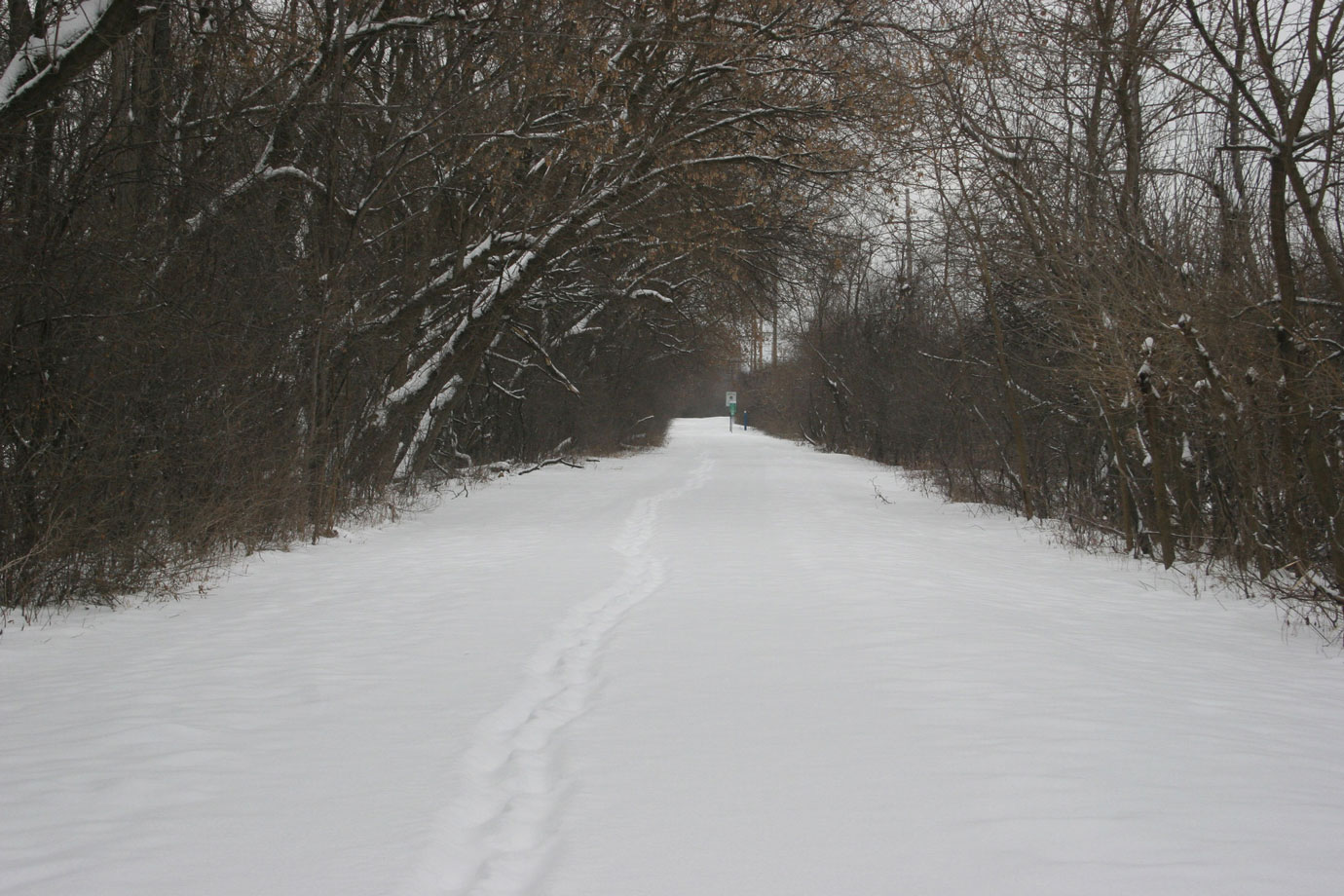 A few days ago I started going for walks again. Let me be precise: outdoor walks, in the cold. This is quite an accomplishment, considering I usually let January’s subfreezing temperatures and meager daylight confine me to the warmth of my living room couch for days on end.

But I decided that enough was enough and I no longer wanted to spend long dull hours trapped indoors simply because the climate is rather uncomfortable.

I decided to fight back. I went outside.

Five minutes later I was back inside tossing through my closet looking for warmer mittens and a scarf. Ten minutes after that, I was indoors again, this time scavenging long underwear, ski pants, and something to keep the wind from nipping at my ears. In the end, several more gear adjustments were required including thick wool socks, a bottle of water, and a pocket-pack of kleenex. Thus equipped, I was able to sustain an hour-long walk through knee-deep snow. I followed a route that I had not hiked since September, a route that I had not expected to hike again until spring. It was thrilling. 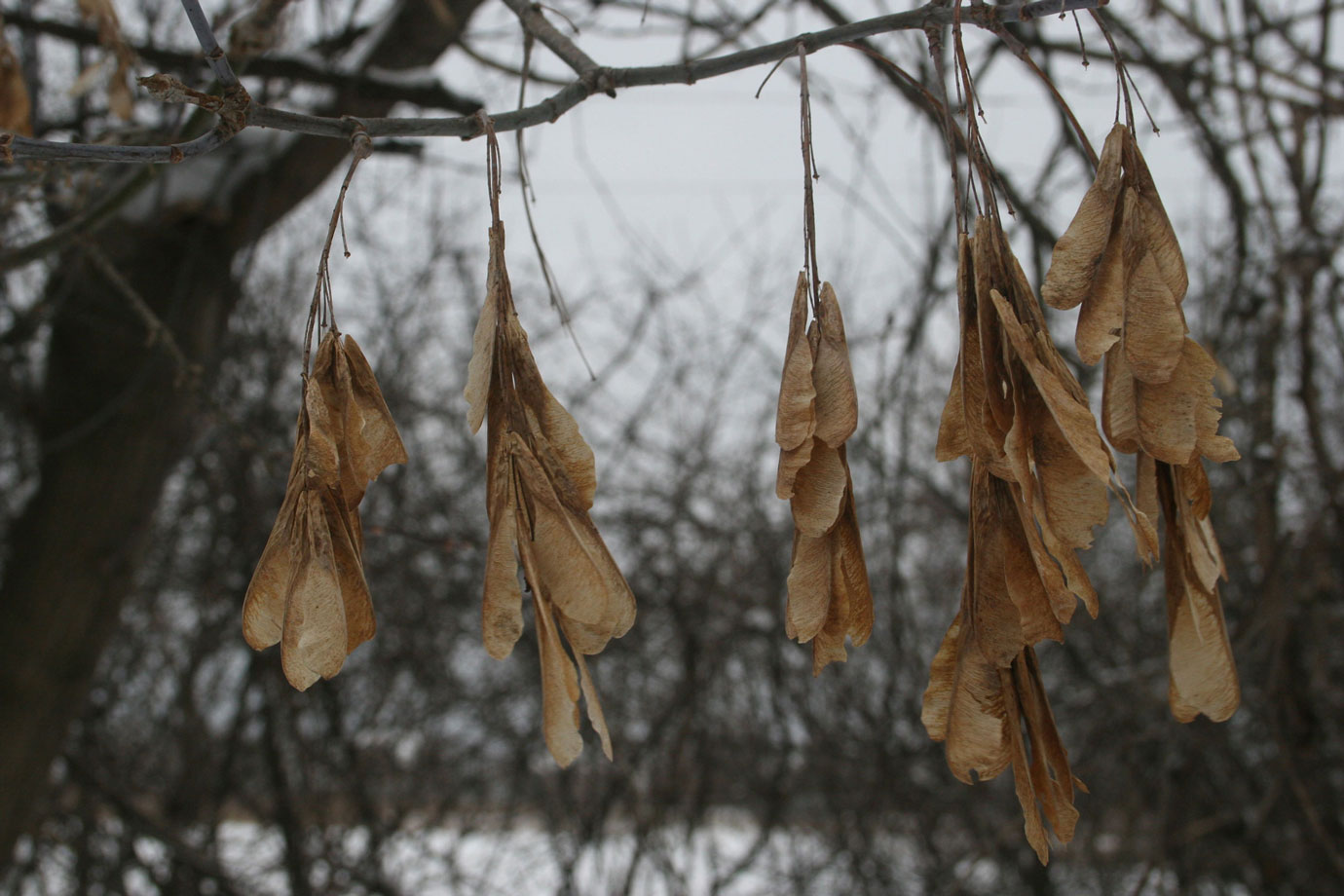 I took a few photos along the way. The colors of winter are beautiful, the grasses and trees take on rich earth colors—burnt siennas and raw umbers. Branches and tree trunks are dark and dormant against a snow so white it makes you squint even under a thickly overcast sky. All around there were faint signs of a forgotten summer. A cluster of dried-out maple seeds clung to a crooked branch. A sprinkling of tattered leaves with veins like little auburn skeletons flickered at the tips of some sheltered twigs. 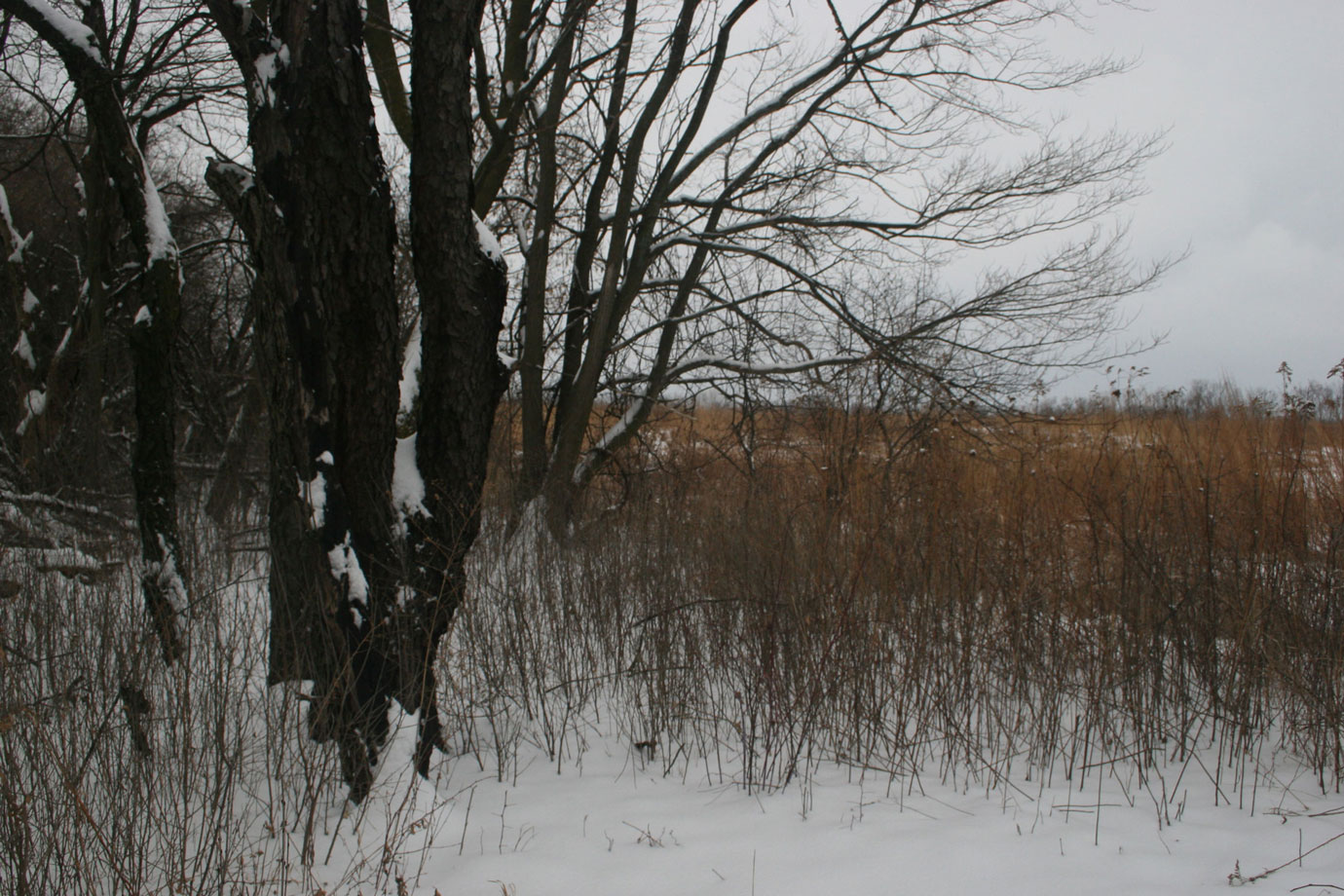 I walked to the edge of the first field (there are two large fields I pass through on my walk). At the edge of this first field, the winding path makes its way to a line of trees dividing it from the second field. I stopped and took a few pictures. I felt an ache in my legs and decided it was time to head home. As soon as I turned around I realized I was in trouble. The wind that had been hovering unoticed at my back was now clamoring at my face, its icy fingers slithering around my neck and howling down my back. My ramshackle winter garb was not enough to keep this wind out. 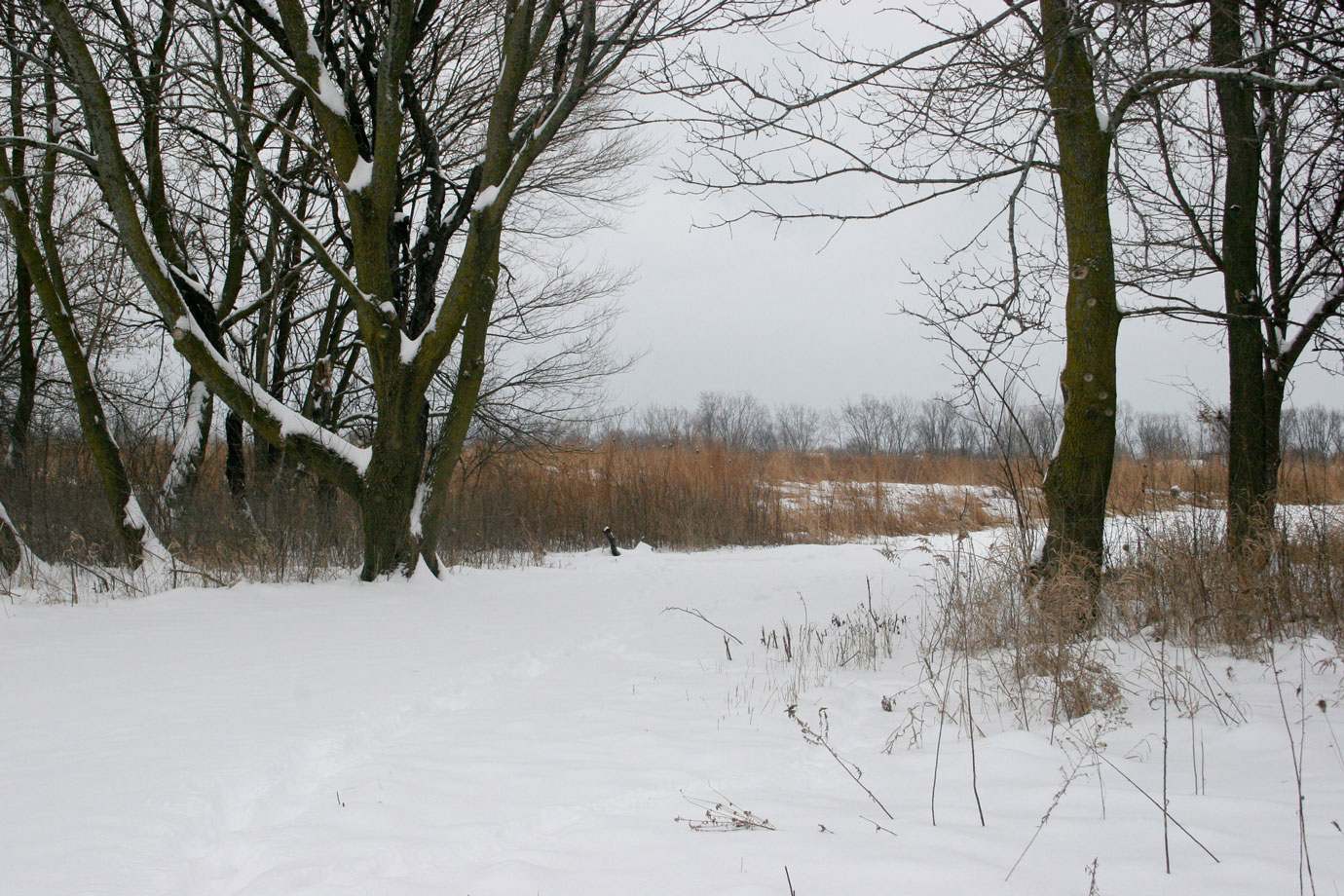 Suddenly I recalled the weather forcast: falling temperatures and increasing winds in the late afternoon. It was 4pm. All of a sudden it hit me how foolish I had been. I had planned only for the milder conditions of my departure, not for the harsher arctic air that had swept into the area over the past half-hour. An icy sensation creaped along the back of my leg. I had not tucked my pantlegs into my boots properly and snow had compacted at the back lip of my boot. I walked as fast as I could.

I wanted to stop and rest, or simply turn away from the wind. But I thought it best to keep moving. It took me about twenty minutes to walk less than half of a mile. At that point, the path turned to the southwest and was lined by trees. The wind was at my back now and the trees softened its bite. I made quicker progress. Another fifteen minutes later I made it home. 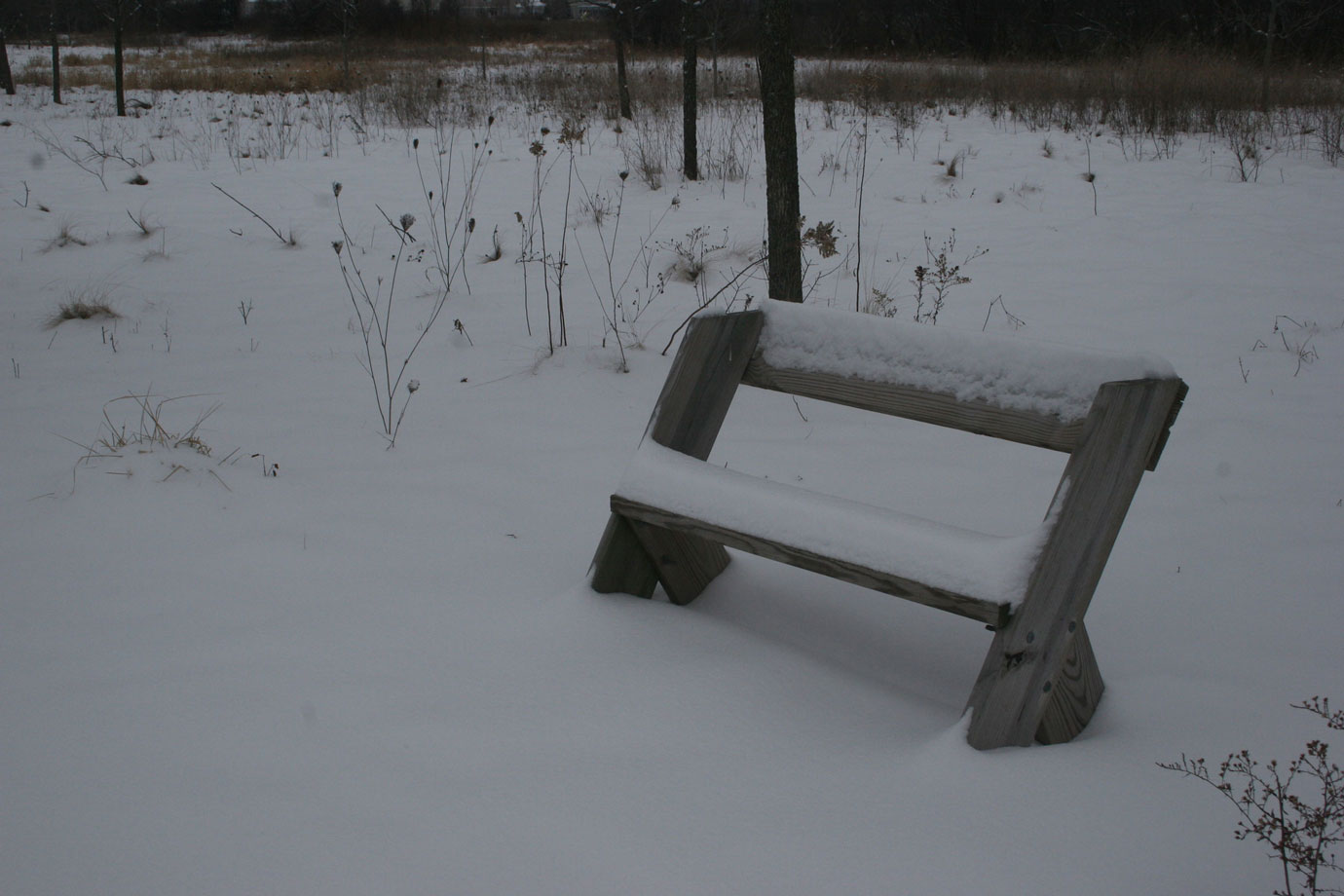 It was getting awfully cold and dark by this point.
Tags for this entry:   walking · winter
« Previous · Westward Travels
Low Tides and Seagull Skies · Next »

It’s been a lovely trip to London and our visit is almost over. One last thing we want to do before heading home is to take a spin on the London Eye. To avoid the daytime crowds, we schedule our ride for half-past eight Sunday evening.